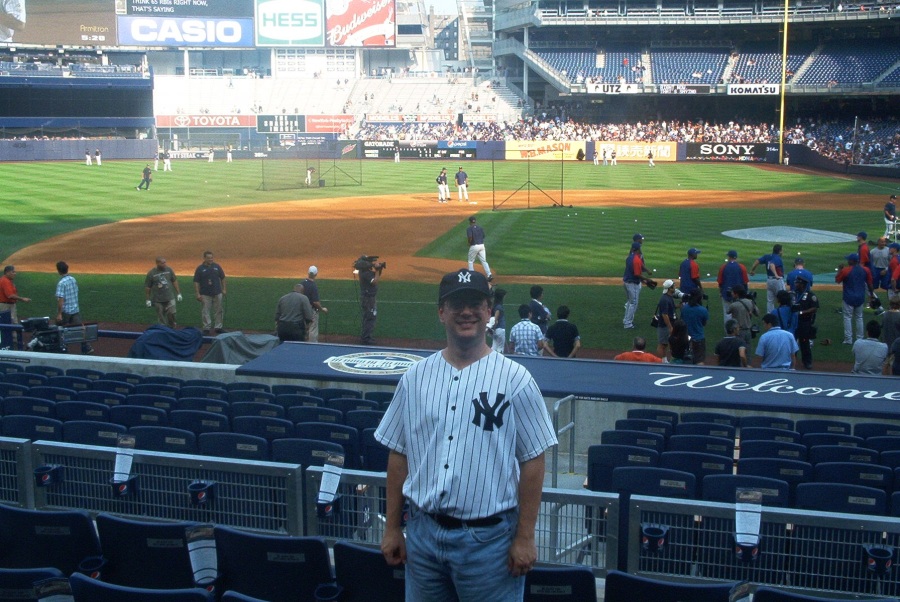 My blogging buddy Rosie has tagged me in the Vogue Parody 73 Questions Challenge, so now I will answer a series of questions about my life without cameras trailing me around my house, the streets of London or the All England Lawn Tennis & Croquet Club — where they will let Roger Federer walk on the grass, but don’t you dare ask.

It’s tidy — computer, various papers, mug for water, pictures of me with my wife Suzi.

5. What do you think of open relationships?

If everyone knows what’s going on and comes into it eyes-open, whatever works for them. However, it’s not for me.

6. What is your favourite video game?

I don’t feel guilty for eating them, but my wife Suzi has a brownie recipe that has been referred to as “chocolate crack.”

“A Season on the Brink”

Laptop for work. We have a desktop at home, but I do 99 percent of my stuff on my iPad.

My parents taught me that if you say you’re going to do something, you do it.

13. What project are you working on right now?

Answering a list of 73 questions that Rosie tagged me on. (Although by the time you read this, I won’t be, because it will already be done.)

15. Did you get good grades in school?

I played baseball and basketball (although “played” is used loosely there) in high school. For years I played in a pickup volleyball game Wednesday nights with friends. Now I golf and bowl once in a while, but my main game is pickleball.

I have a bachelor’s degree with a dual major in speech and journalism and a master’s degree in political communication.

I have never identified myself as being a particular nationality, so I don’t really know in any great detail. I’m a generic white dude. What I always tell people is that if they throw a dart at a map of Western Europe they have a chance.

NASCAR die-cast cars, although I haven’t added to it in a while because I filled the display case.

22. Describe yourself in three words?

23. If you were a rapper what would your stage name be?

MC You Suck … because that’s what people would be saying.

24. Who was the last person you DMed?

My last two were both former co-workers, including telling one of them I was proud of her.

The Yankees getting some decent starting pitching

From reading other people’s 73 Questions, I believe this is a “Harry Potter” reference. Beyond that, the next thing I know about sorting houses will be the first.

28. What are you most grateful for this year?

That there is a woman who chooses to stay married to me. That I have friends who choose to keep talking to me.

29. What’s the best thing that’s happened to you this month?

I went to two fireworks displays for July 4. (My wedding anniversary is tomorrow, but as I write, that hasn’t happened yet.)

30. What’s the best thing that’s happened to you today?

I woke up on this side of the grass. It has been fairly uneventful otherwise.

That the average lifespan of an American male is more than the 47 I am now.

34. What fictional character do you relate to the most?

36. What’s the biggest surprise you’ve ever had?

I can’t think of one as “the biggest,” the the most-recent is how much I enjoyed Oregon.

37. Which surprise made you cry?

I’m not sure one ever has.

38. What’s the best surprise you’ve given someone else?

Even though we had talked about it in general, I’m pretty sure Suzi was surprised when I pulled out the engagement ring on the Williams College campus.

Do leftovers in the microwave count?

The next one … which will probably be ice cream.

Most of your fruit-based ones, apple pie being an exception

I usually don’t eat in my dreams.

47. If you could teach a college class, what would it be called?

Ages ago, as in he was a toddler then and he’s in college now, I was babysitting a friend’s little boy. He wanted to watch “Toy Story,” so I put it on. About halfway through, he lost all interest, but I had to see how it ended!

49. What has a girl said or done to impress you?

Suzi puts up with me. That’s impressive.

Apparently whatever I was doing on my first dates in college. LOL

When I was visiting a friend in college, I was chatting up a girl, and one of my friend’s buddies suggested I try “If I could rearrange the alphabet, U and I would be together.” I did not try it. We parted at the end of the night, although not because I didn’t use that line. She just went back to her dorm.

54. Name three things which can always be found in your purse.

Whatever I toss in Suzi’s while we’re traveling. As for my pockets, keys, wallet, cellphone (two if I’m working).

56. If you could play a historical character in a movie who would it be?

God (May as well swing for the fences, right?)

Never had one. I once went with a co-worker to a restaurant that just added sushi. They offered us samples, and it was so awkward to tell them I didn’t want any without insulting them terribly.

Chapstick, but only when I’m sleeping

60. What foundation do you use?

My house has a basement. My parents’ has a foundation.

64. What are you doing tomorrow?

Pickleball in the morning, anniversary dinner at night.

65. Movie you laughed the hardest through?

“Love Actually” is the first one that comes to mind.

I’m not sure I ever have.

67. If you could sing a duet with anybody, who would you choose?

68. If your life was a song what would the title be?

“Someday I’ll Figure It Out”

My friend Bob. He does doodles on plates for his daughter and posts them on Facebook. He’s really good.

Of ones I haven’t visited (aka other than Canada, England, Ireland or Scotland), Switzerland.

And now … I tag other bloggers to join in on the fun!