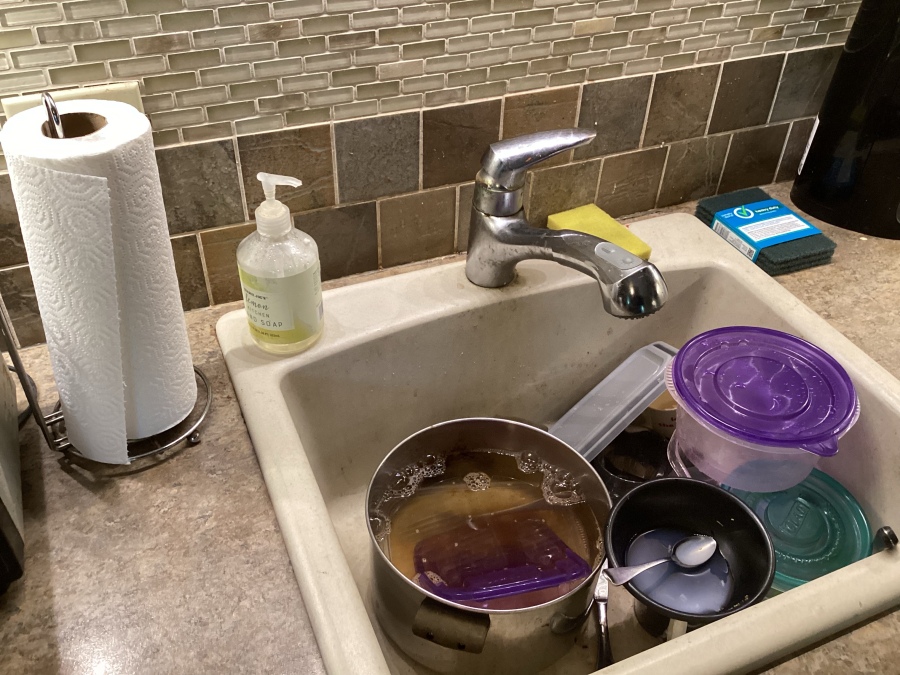 I’ve always viewed soaking as something of a universal cure.

Grease, gunk, grime on a dish? Fill it (or find a way to cover it if it’s flat) with hot water and soap, let it sit and whatever’s on there will just slide off.

But the black, burned stuff on the pot wasn’t cooperating, even after washing in the dishwasher, followed by soaking, then soaking, followed by washing.

It didn’t render the pot unusable, but it was annoying me. It was unsightly, and what I was doing wasn’t working.

I hate when things I do don’t work.

In the past, I would have let the sink get full to overflowing, put as much in the dishwasher as possible and hand-washed the rest. That, however, was before the ants started hanging around the sink.

Ally over at The Spectacled Bean wrote about taking pictures of the mundane, the imperfect, the ordinary, not the perfectly curated Instagram photos. I got thinking about what that would be, when I looked up from lunch and saw the dishes kitchen sink.

It wasn’t especially full: breakfast bowls and cups, a few pieces of silverware, plastic containers used in lunch and leftover preparation that may or may not be Tupperware but we usually call that, anyway.

And the soaking pot with the gunk in it.

It probably wasn’t going to get much more in it. With hamburgers and fries on the menu for dinner, there would be a couple plates and a little more silverware added. Suzi cleans the pan, and I’d have to wash the baking sheet for the fries by hand because it doesn’t fit well in the dishwasher.

In the past, I would have let the sink get full to overflowing, put as much in the dishwasher as possible and hand-washed the rest. That, however, was before the ants started hanging around the sink.

Now, I need to put stuff in the dishwasher every night, even if it’s not a full load. I’ve always preferred to load everything all at once so I don’t have to rearrange and redo what I did before, but now I have think about what can go where, what’s coming up and how to build a load.

Yes, I strategize my dishwashing. Doesn’t everybody?

Over on the side of the sink was what I needed to tame the gunky pot — a three-pack of heavy-duty scouring pads. After I loaded everything else into the dishwasher (it was maybe a quarter full), I grabbed a pad, turned the pot on its side and got to work.

Yes, I compete with inanimate objects. Doesn’t everybody?

It took a little work, and while I may not have gotten all of it, I definitely got the worst of it.

4 thoughts on “Cleaning up”