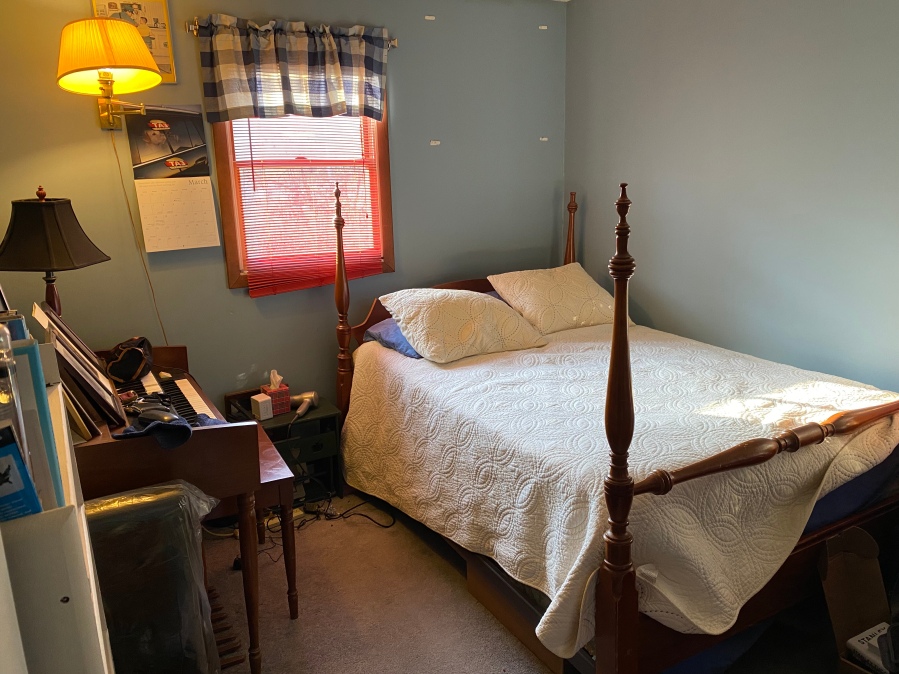 My bedroom used to be my inner sanctum.

I had my own stereo, my own TV. When my parents got a new chair, I convinced them to let me put the old one in my room. Sure, it was old and pretty ratty, but I had my own chair!

The wallpaper was of NFL teams, and a Nerf hoop was hooked over the door. If I were as dominant against other people on a real basketball court as I was alone in my bedroom, I don’t know what I’d be doing today, but I’d be doing it as a multimillionaire retired NBA star.

And if I didn’t want anyone to bother me, I could close the door.

The stereo is now a relic, the TV replaced by one too “smart” for anyone without an advanced degree from MIT. The chair is long-gone, the walls painted. My old bed has moved with me from place to place, and is now in our upstairs office.

The room didn’t become a handy place to store stuff that didn’t otherwise have a home as soon as I set out for Utica in August 1994, but it got that way over time. Now, there’s basically a path from the door to the bed, and Suzi and I have to navigate the space carefully if we’re both in the room at the same time.

Its days of being the place in my parents’ house where I spent most of my time long gone, it’s now basically a place to drop our stuff and sleep when we visit.

But the other day, I did something in there I never did before — work.

Unlike our usual overnight, quickly in and out trips to our parents’ houses these days, we were actually there for a couple days, as Suzi conveniently had a speaking engagement about an hour away in Oneonta the day before my father’s birthday, so we made a trip out of it.

I usually work at home on Fridays; in this case, the home I worked from was my parents’. I did most of my work on my laptop at the kitchen table — interesting enough in itself — but I had to make a couple phone calls, so in the interest of privacy, I went into the bedroom.

But since cell service has always been a sometime thing for me at my parents’ house, I had to use their phone.

At least it was cordless.

Across the street is a creek.

It’s kind of a local weather gauge. Lots of rain or melting snow, and it’s high. Dry conditions leave it low, and when the remnants of a tropical storm knock over trees and dam up the creek, it leaves destruction for miles.

When Suzi got back from Oneonta, since I had been cooped up inside working all day, I suggested taking advantage of the gorgeous weather and taking a walk.

And once we were outside, I had a sudden desire to go down to the creek. What used to be a field across from parents’ house is now full of trees and other growth, but a path was easy enough to find.

My brother and I never spent a lot of time at the creek, other than swimming once in a while before we got our pool, and it has been at least 35 years since I was there last, even though we can see it from my parents’ living room.

I would have liked to walk along the creek, but it was a bit too rocky and Suzi didn’t have the greatest shoes on, so we went back up to the road and walked to the nearby bridge.

That night, we went out to dinner at the local diner, allowing me to indulge in my love of small-town diner hot turkey sandwiches. My mom made breakfast the next morning, and then we went out to lunch for my dad’s birthday before going home.

Renata has been thinking a lot about her Uncle John lately.

Giggles had a lot going on.

Depending on the time of year, different types of days can be perfect for Mikaela.

Pea Green’s exciting, scary opportunity has come to an end.

Ferrari is now a mother of two.

We all have odd beliefs. Here’s one of Jeff’s.

Liz found a job she’s not qualified for. Me, either.

Vee learned something about working for startups.

Paul previews the Formula 1 season. I just hope the races are as interesting as “Drive to Survive.”

Where Michelle lives now is very different from where she grew up.

The Huntress had to deal with someone who came on a little bit too strong.

Sometimes, that’s just how you feel.

With a stick like that, you don’t need to speak at all.

Have a good time!

Nope, showed up with my short hair just for fun.

I wonder about people who like me for the same reason.

We all remember what happened two years ago, but some of us have more to remember than others.