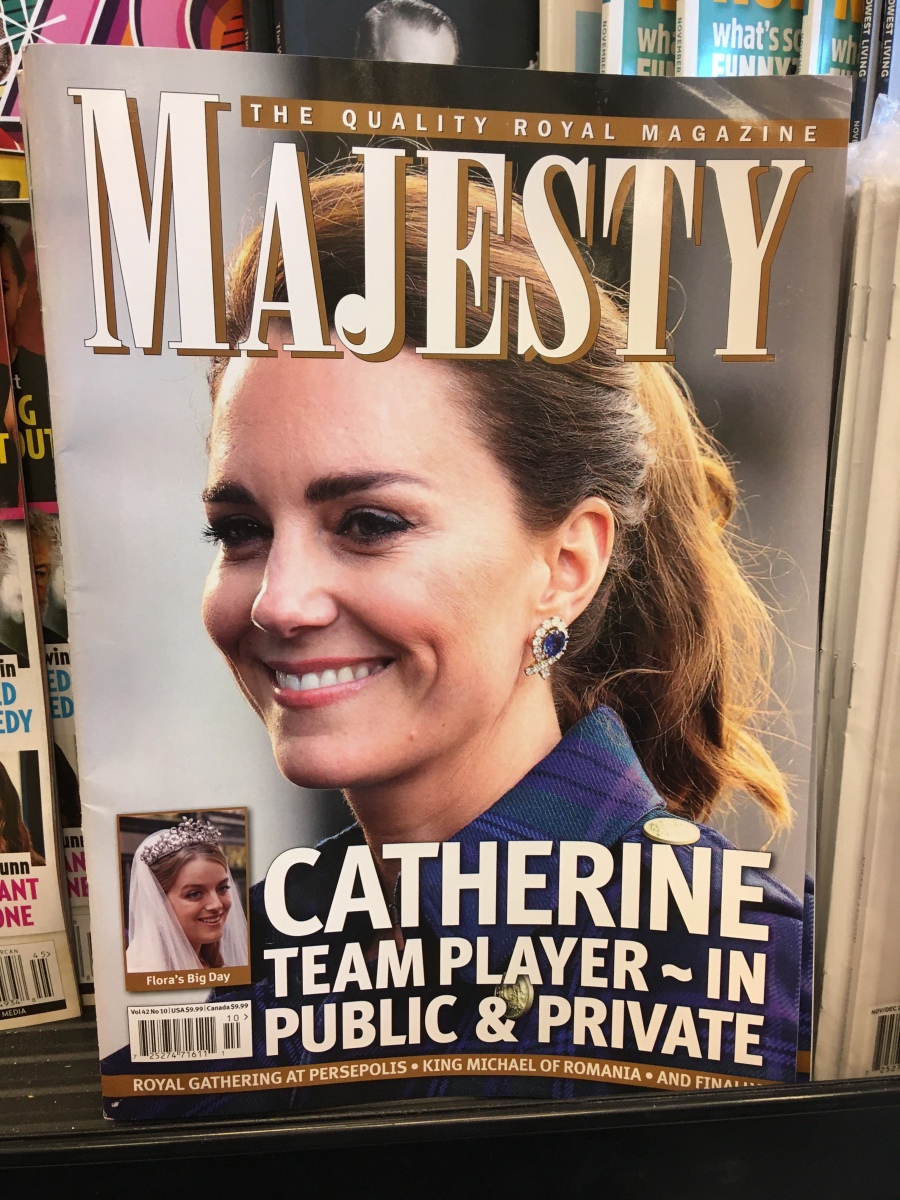 I think we can all agree that if you’re going to read magazines about royalty that you see in suburban big-box bookstores, you should be sure to read a “quality” one.

And I’m sure they’d tell you that “OK!” and “Hello!” are nothing but swill.

After all, life is too short for second-rate royal puffery.

Oh, no … you need to hear all about how Catherine is a “team player,” which I’m sure isn’t a very thinly veiled shot at any other family members, right?

No, you’re not going to get me to believe there are Christmas lights that last 10 years.

“I’m sorry, there’s willing suspension of disbelief, but this is a little bit much.”

I mean the person who decided to leave a comment that I just didn’t want to deal with on one of my posts.

So I deleted it, and didn’t feel bad about it.

Other than spam comments, it’s the first time I’ve done that. Is that like a blogger rite of passage or something?

Pepper is incredibly frustrated, and it’s hard to blame her.

“At this point, I feel like I should trial-and-error treatments for her MYSELF, using the Internet. I’m losing faith in doctors. They haven’t been helping. All they’ve been doing is booking appointments and taking my $$$, and my daughter hasn’t improved at all.”

I’m going to go out on a limb and say Jeff wasn’t impressed.

“Oh, hooey. You didn’t say ‘I didn’t and won’t get the vaccine,’ but you were perfectly happy to steer us toward thinking you had. That’s deceit. So, a lie.”

Dave weighs in on the pluses and minuses of “maturity.”

Emily is writing a novel this month, and knows she needs to nail it from the first sentence.

“Want to know my current first sentence? ‘Tamar would come to a bad end, everyone agreed.’

Graham tried to teach after getting his booster shot. I don’t think it went well.

“At one point I reach a pretty early low when I realise that I’m writing about a character on the board, but it’s a character who doesn’t actually feature in the text that we’re studying. Little tip for you; neither George nor Lennie appear alongside Scrooge in ‘A Christmas Carol.’”

Meanwhile, Lindsay’s about to go back to teaching after having had COVID. We’ll see how it goes.

“The headache has gone. I can climb the stairs without passing out or falling down them. The kidney pain likes to make a comeback every now and then but hopefully it shows they’re still there and working in some capacity. The brain fog could be an issue or I’ll just blend it with my class. I’m thinking the latter.”

Austin was a close contact to a person who tested positive, and even though he’s fully vaccinated and boosted, it threw him into a bit of a tailspin. (Spoiler alert: he tested negative.)

“I felt fine physically, but mentally, I was totally frayed. All I could think about was getting sick. I could not turn off my brain, or even change the channel. I would have been happy with a fuzzy signal for a while just so I could get some rest, but my brain has multiple back up systems just in case my anxiety ever causes a short circuit. And because of these redundancies, I am never able to stop thinking about something that has put me in a panic.”

Renata has always wanted to do all the things, and now she apparently has a term for it.

“Now, as I’m faced with a full-time job hunt, I’m prioritizing variety right off the bat. I’ve gone into every interview saying that ‘the one thing I fear most is doing the same thing for 8 hours a day.’ I love having the opportunity to be creative, but even then, I need to be doing different things.”

Every now and then, Rosie writes something that makes me think I’m going to see a 20-something woman from New Jersey when I look in the mirror. (Our birthdays are one day apart.)

“I always struggle with wanting to be good at things as soon as I start them, just ask the hundreds of hobbies I’ve abandoned. I just keep reminding myself that no one knows everything on day 1 and this new job is truly a growth opportunity so I need to accept that I will be learning and probably failing from time to time.”

The results of Pea Green’s big job opportunity were … mixed.

“So right now, it’s been one step forwards, two steps back and then into limbo. Watch this space for the next exciting but scary installment of my professional life.”

Kristian has been working on changing a lifetime of thinking.

I remember when I had this epiphany, it was as if I actually saw the light go off in my brain, and I stood in front of the mirror, naked (something I have always tried to avoid), and I gave myself an apology. I sobbed so hard I fell to my knees, but I continued talking and screaming, and I was no longer angry with myself. For the first time ever, I showed myself the same amount of unjudgemental kindness I give everyone else.”

Vee’s birthday wasn’t as grand an occasion as it should have been, especially since she just got the new job she wanted.

“I’m very scared about what’s happening in my personal life right now. There’s a lot of unknowns and that’s caused my anxiety to skyrocket. Which, I’d had my anxiety in check for several months. Sure, I have fluctuations every now and again, but I had gotten relatively okay at calming myself since August. Now I just don’t know what to do going forward.”

Now that she’s getting settled in Australia, Michelle is looking for a job.

“There aren’t a lot of openings in my field, especially at universities (where I wanted to work). Now I’m going through the process of looking for a job in education, either as a teacher or teacher aide. Actually, I don’t mind what kind of work I do, as long as I can contribute to the bills.”

“While most people dream of this day, my other half has been strangely dreading it. The man has worked since he was 12 years old and he’s going to have a hard time adjusting.

To be honest, he’s not handling the aging process well. Instead of looking forward to relaxing… he feels old and unproductive. Put out to pasture, next step death.”

“I’ll be revisiting a point in my life that was as messy as it was formative. A place and time that never really actually feel that far away, thanks to Taylor’s gift of capturing and remembering moments, even the ones that hurt. We’ve come a long way, and I’m so grateful to have had Red back then, and I’m grateful to get to hear it for the first time now.”

Not just every mistake in the past, but everything that could possibly go wrong in the future.

“Schoolhouse Rock” should be mandatory in every curriculum, although I’m not sure they’d know what to do with “How a Bill Becomes a Law” these days.

You’re just rolling along, enjoying your Sunday, and then it’s like someone lowers to boom on you.

What’s worse is that we Yankee fans all know he’ll be the starting center fielder most of the year, even at 117 1/2 years old.

If I could, I would.

I wasn’t too far off from this the other night, and I don’t live alone.