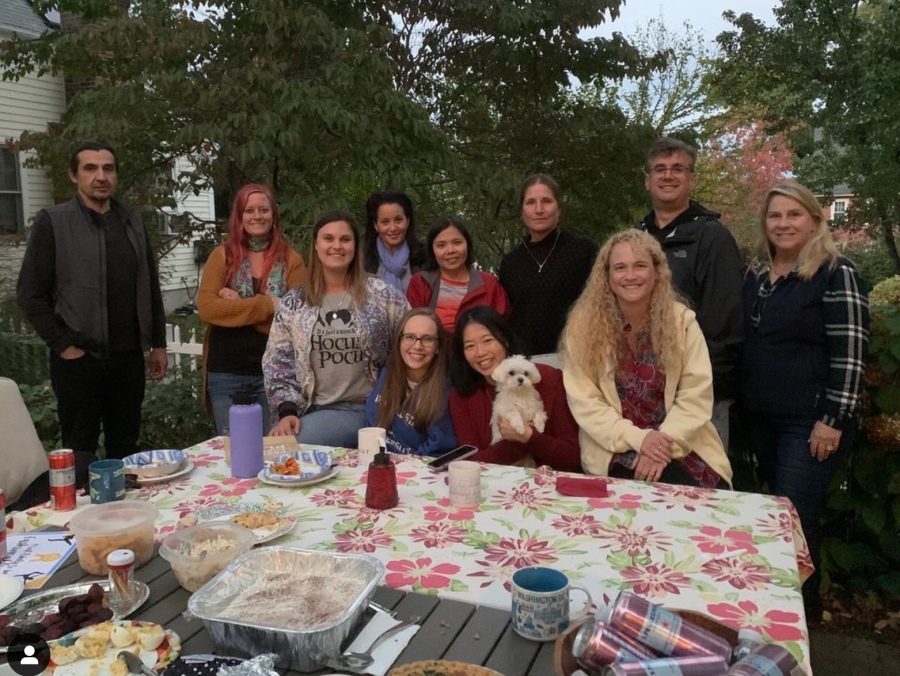 My exercise class ended the other day.

Jamie, our instructor, and her fiancé had moved about 45 minutes away, too far to drive for an hour-long class three times a week, so she decided it was time to call it quits.

I wore an orange T-shirt for the occasion, not because it was on Halloween — I’m fairly indifferent to it — but because it was from one of the 5Ks I walked as a member of the class.

Jamie worked at the school for which the 5K served as a fundraiser, so I thought it would be appropriate, and my pink T-shirt was dirty and it was too chilly for the white one.

So orange it was.

It was fun because no one took it too seriously. Make a mistake? Keep going. You’ll catch up. Jamie makes a mistake? Just follow Bill. (For years, I insisted that I didn’t know the routines as well as Jamie thought I did, but enough of them stuck over time.)

I was in the first class on a Thursday morning more than 4 1/2 years ago, moving to Monday and then Tuesday evenings, from the gym to Zoom (after a months-long absence due to COVID last year) to the parking lot of the shopping plaza where the gym is located.

Our spot was next to a pizza place. The smells were sometimes … interesting.

I first went because I was looking to get in a little better shape from the slug I was at the time, and a cardio-kickboxing class seemed like it might be fun.

It ended up being more fun than I could have imagined, but not just because of the kicks, punches, jumping jacks and other moves.

It was fun because the first time I said I liked burpees better when I was in elementary school and they were called squat-thrusts, it became a joke between Jamie, me and the rest of the class until literally the last day.

It was fun because no one took it too seriously. Make a mistake? Keep going. You’ll catch up. Jamie makes a mistake? Just follow Bill. (For years, I insisted that I didn’t know the routines as well as Jamie thought I did, but enough of them stuck over time.)

It was fun because even though we didn’t hang out as a group after class — there were some ones and twos, along with a married couple — we enjoyed each other’s company during the time we were together … even when we were no closer than boxes on a screen.

(By the way, my setup was an iPad wedged in the sock drawer of my dresser. It was the only place that was just the right height.)

And Jamie made it fun. We had a going-away party/class celebration — that’s the picture at the top of this post — and befitting my status as the class original, I was asked to say a few words.

I rambled a bit, as I tend to do, but my main point was that we all could have gone to different classes, and there are who knows how many more online, but we were there because we didn’t just want to take a class, we wanted to take her class.

But as much as we said Jamie meant to us, she kept insisting we meant as much to her. Maybe it was a wash, but all I’ll say is that there are a lot more of us than there are of her.

So yeah … I’m going to miss the class. I already do.

However, it never occurred to me how I’d miss it until the night Jamie texted me to say she wanted to talk before class, which is when she let me know she was ending it.

It never occurred to me because I never thought about it. Why would I have? It was too ingrained — between the two of us, Jamie and I figured out that I may have missed five Thursday/Monday/Tuesday classes over the years — and I was having too much fun.

Yet as much fun as I had, and as much of a highlight as it was every week, I guess they were right when they talked about not knowing what you’ve got ’til it’s gone.

5 thoughts on “Class dismissed … and missed”