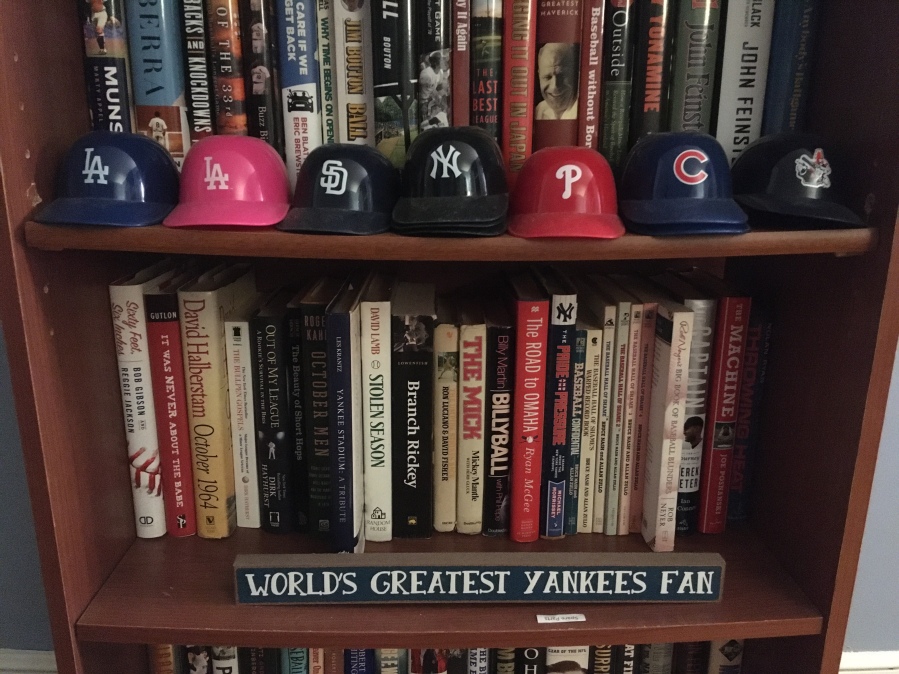 My guys were very creative in getting me gifts for my college graduation.

There was the gift of … let’s say dubious origin, so the less said about that, the better.

There was the teal Florida Marlins baseball cap, back before they were the Miami Marlins and at least the teal was somewhat fashionable.

And there was the Doug Gilmour trading card.

It wasn’t just a trading card for a hockey player we liked. It was a symbol, a reminder of those Saturday nights watching “Hockey Night in Canada” on CKWS, of Don Cherry rhapsodizing about “Gilmour … Dougie Gilmour” during “Coach’s Corner.”

We loved everything about him — his scoring, his passing, the fact that a guy standing 5’ 11” and weighing 175 pounds was the toughest guy on the ice. (After all, his nickname was “Killer.”)

So that card symbolized all that and the bond I had with my guys.

It did, however, leave one question.

What was I going to do with it?

I don’t know where they are now, whether, in the card-collector’s lament, my mother threw them out or if they’re buried somewhere in my childhood closet.

It wasn’t the corner store, as in a store where two roads met, although it was. It was The Corner Store, as in the actual name of the country store in the town where I grew up.

Friends we visited on a multiple-times-a-week basis when I lived right down the street from the store, plus we’d pass it whenever we went anywhere, making it convenient to drop by and grab a few things without a full trip to the grocery store 20 or so minutes away or in the city.

(And by “the city,” in my small upstate New York hometown, that usually meant Albany or Schenectady.)

They also sold baseball cards, and every now and then my parents let me buy a package. I’d throw out the gum included in every pack — I’ve never chewed gum in my life, and that stuff looked disgusting — and rifle through the cards, probably to see if there were any Yankees.

I’d look at the pictures on the front and read the stats and information on the back — players without a lot of experience in large print to fill the space, veterans in tiny print to get it all in.

Then I’d either wrap a rubber band around them and put them in an old shoebox or store them in some locker-like contraption. I don’t know where they are now, whether, in the card-collector’s lament, my mother threw them out or if they’re buried somewhere in my childhood closet.

Storing them that way made them unsuitable for buying and selling, but I wasn’t interested in it then, and with baseball cards as investments apparently coming back, I wouldn’t be interested now even if I were still collecting.

Sports cards are meant to be studied and turned over, not carefully kept in a photo album or a safe. And investments? That’s what stocks are for.

I don’t remember many details of individual baseball cards, but for some reason, the 1978 Topps Nolan Ryan card sticks in my memory.

I was 6, and before I knew about the strikeouts, the no-hitters, the place in the Guinness Book of World Records for the hardest fastball — I ordered the record book every year in elementary school, which is how I learned his actual first name is Lynn — I decided I was a Nolan Ryan fan because of that baseball card.

In 1999, he flew into the Albany airport the day before his induction into the Baseball Hall of Fame. He said a few words to the fans gathered, but I got a chance to meet him (I knew people), talk to him for a few moments and shake his hand.

Unfortunately, there wasn’t enough time to get a photo or an autograph, so any proof it actually happened probably exists, but would be really hard to find.

Other than my NASCAR die-casts, I don’t really “collect” things anymore — and I haven’t even added any cars in the last few years.

I have a bunch of plastic baseball helmets, but they’re not something I would buy in a store. I have them because I like eating ice cream out of them.

Instead of collecting, these days I just acquire items for my sports room — a baseball an umpire threw to me, giveaway bobbleheads, a proclamation that I’m the “World’s Greatest Yankees Fan,” art photos of Hadlock Field in Portland, Durham Bulls Athletic Park and an old-time baseball game.

So what about that Doug Gilmour hockey card?

I hatched a plan right after they gave it to me, and it involved going back to where they had gotten it in the first place — Sangertown Square Mall in Utica.

The mall was hosting a sports card and collectibles show that weekend, and my idea was to buy a small picture frame and trading cards of favorite players from other sports.

The Junior Seau and Charles Barkley cards were easy enough to find. However, in upstate New York, in 1994, when Don Mattingly was every Yankee fan’s favorite player … that was going to be tough.

Looking through display after display, I thought I would be out of luck, but at one of the last tables (it might have even been the last one), I found one.

Twenty-seven years later, I still have those four cards in that small picture frame, on a bookshelf with a replica FA Cup trophy I picked up at Wembley Stadium in London and a photo of Thurman Munson.

The whole thing might have cost $25, and a good chunk of that was probably the frame.

The cards are probably in pretty good shape — after all, they’ve been under clear plastic since 1994 — and they may even be worth a little something.

But you couldn’t buy them off me for anything. Friendship — the things you do, the memories, the symbols — has no price.

One thought on “Friendship in the cards”