The couch in our TV room is very important to me, especially the portion next to the end table.

No one else sits there. Every so often, our cat Sasha, who has claimed every other piece of furniture in the house and generally been allowed to get away with it, will give it a whirl if the sun is coming in just right, but if she even sees me coming, she bolts.

She knows better than to try me.

The cushions are set to my exacting specifications — which is a nicer way of saying “they mold to my shape because I sit there all the time” — to the point where I thrash about if Suzi either fluffs them or swaps them out for other cushions.

I also have the end table right where I want it, and have to carefully put it back in place if we move it to clean the room.

Unfortunately, I started feeling recently that I was becoming one with the couch, because I was sinking whenever I sat down.

I can appreciate the skill and creativity of a good home-improvement show like “This Old House” or one where a mechanic refurbishes an old car back to its former glory.

Plus, my father is a mechanical genius. For example, my first car in high school was a 1984 Dodge Aries, but we nicknamed it “the MacGyver car” due to the various creative means used to keep it on the road.

When the engine fan wasn’t working, my father attached some wiring to the fan, threaded it through a hole he had drilled in my dashboard and attached it to a toggle switch he had found.

And it worked. He got around whatever was keeping the fan from running by setting it up so I could manually turn it on and off when I started the engine.

When we decided I needed to get a different car, all we could get for it was a set of rims from the local junkyard, but let me tell you … I used that car up.

However, I inherited almost none of my father’s ability. Destroying stuff is more my thing, although once in a while, I can help figure out a solution that’s less about getting the proper supplies from the hardware store and more about using random crap around the house.

I nailed that piece of wood to the beam, applied copious amounts of spackle or grout and pressed the tile against it, hoping it would hold.

Unexpected holes in walls are never a good thing, but especially not in a shower, on account of the whole spraying water thing.

But that was what happened when we lived on Cape Cod. There was a hole in the wall, and a tile sitting in the bathtub.

As Suzi and I tried to figure out what was wrong, it looked like the wooden beam in the wall was fine, but whatever had held the tile in place had rotted away. I went down to the basement, where I found a random small, thin piece of wood that must have been scrap from some other project.

I nailed that piece of wood to the beam, applied copious amounts of spackle or grout and pressed the tile against it, hoping it would hold.

And the only way you might have been able to tell something was amiss is that there was one tile where it looked like someone made a mess while installing the shower.

I adjusted to my troublesome couch as much as I could, mostly by trying to sit on the parts that weren’t collapsing underneath me.

Eventually, though, we tipped the couch forward, cut at the fabric on the bottom — the couch sits low to the floor, so no one was ever going to see — and tried to figure out the problem.

The culprit? A broken spring, probably caused by standing on it one too many times when we opened the windows.

For the answer to that question, Suzi headed to the basement and grabbed a piece of wood sitting atop the remnants of an old entertainment center. 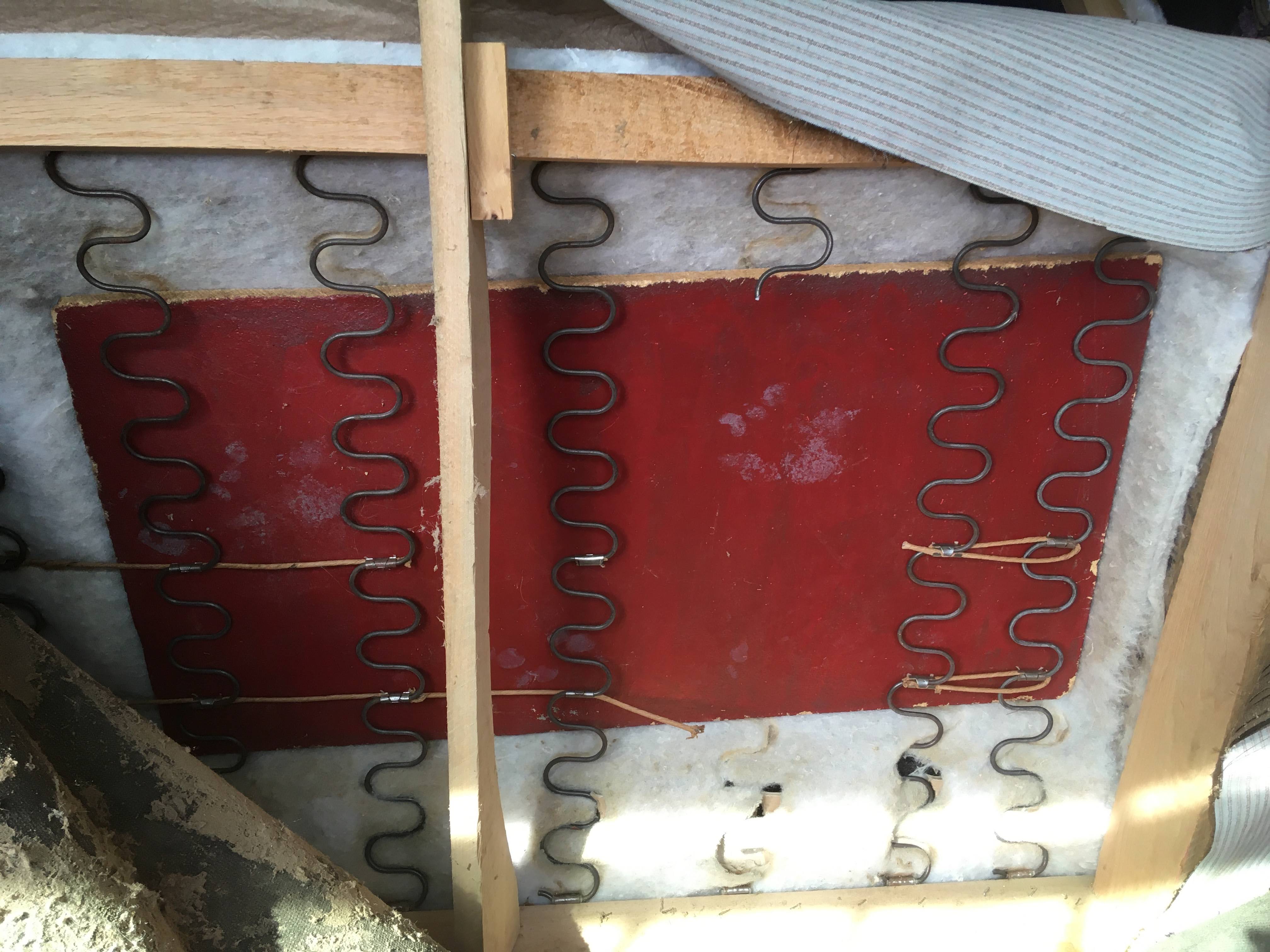 Then it was just a matter of installing it so it would stay in place, and I realized that I could wedge it under the remaining springs.

The strange thing is … we have no idea where the wood came from. Suzi’s best guess is that her father left it here, but that leaves open the question of why he’d bring a random slab of wood to our house.

Whatever the source, it’s working pretty well so far. I definitely sit higher, and it’s getting more comfortable all the time.

It almost feels like the spring-and-wood setup is starting to get broken in, but I just hope it doesn’t get broken, because that might cause a problem to which I’m not sure the solution is in my basement.

5 thoughts on “Solutions wherever you can find them”