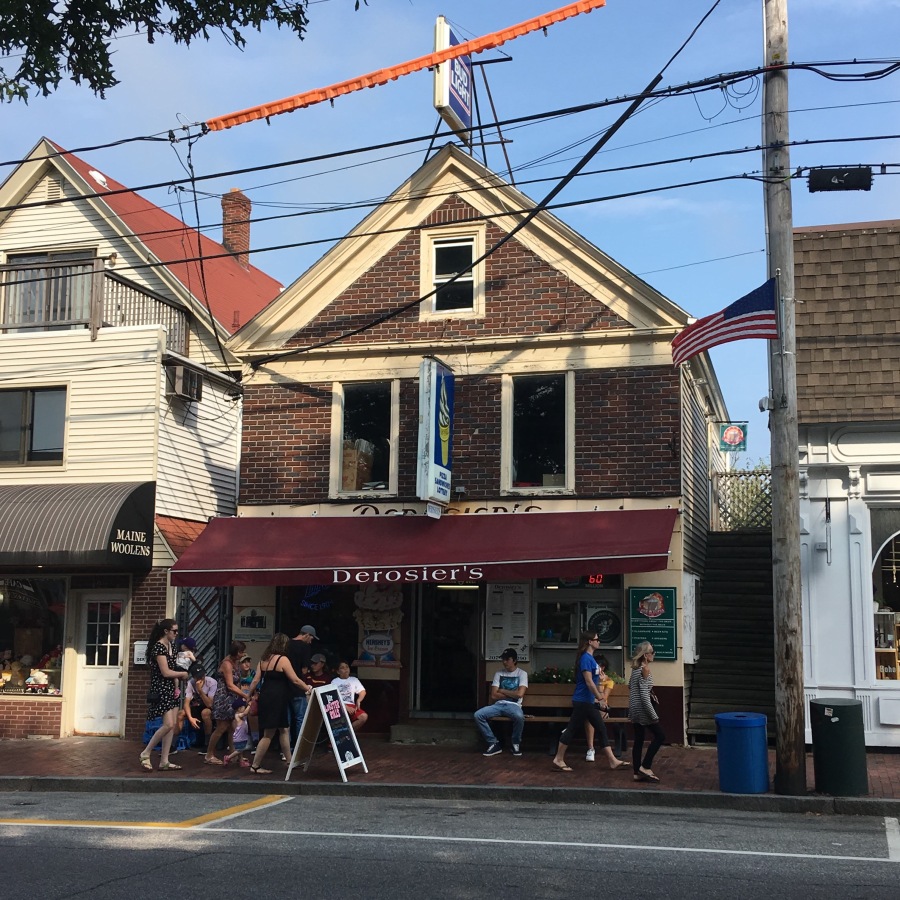 There’s a guy up in Maine named Aaron.

He doesn’t seem to be the most-social guy in the world, but he has a best friend named Holly who thinks he personally hangs the moon every night.

I’m pretty sure the feeling is mutual, but there’s something about the way Holly feels that’s … different.

And whether it’s willful because they had a bad date once or he’s afraid or is just plain clueless, our man Aaron just doesn’t seem to get it.

If I could, I’d shake him by the shoulders — once I was able to get within six feet, of course, since he’s a stickler for social distancing — and say “Dude, she’s completely nuts about you … do you not understand?!”

But I can’t do that because not only do I not live in Maine, Aaron doesn’t actually exist.

They are regular characters on my blogging buddy Austin’s The Return of the Modern Philosopher. Whether they’re based on real people or simply products of his imagination, only Austin can say, but while I like all of his stuff, the adventures of Aaron and Holly cause a definite reaction.

As long as there aren’t other people around, I assume those benches at the Derosier’s in Freeport, Maine, pictured above are far enough apart for Aaron and I to sort out his issues.

“I love that feeling you get when you don’t remember that you’re reading. When you’re so captured by a book that you forget you’re reading the words. All you see is the descriptions and conversations that being to play out like a movie in your head. You don’t even think about it. Then before you know it, you’ve read 100 pages without realizing it. That’s probably the best feeling in the world.”

This post is part of my latest collaboration with my blogging buddy Renata of Buffalo Sauce Everywhere based on the Tumblr post above. I chose to write about what makes me enjoy great writing, while Renata focused on getting immersed in something … and what happens when it ends.

Note: This section has references to suicide. Feel free to skip if necessary.

There are some pieces I consider foundational, the first ones I go to just to remind myself of what writing can do: Rebecca Traister’s “Of Valentine’s jinxes and packaged gnocchi,” “My Friend Sam” by Curtis Sittenfeld, “The Opposite of Loneliness” by Marina Keegan, Charlie Pierce’s “The Cynic and Senator Obama.”

“Doug Ault and the Triumph of Joy” by RJ McDaniel is one of those pieces.

Doug Ault hit the first home run in the history of the Toronto Blue Jays, a nice piece of trivia for sure, but McDaniel dives into the man behind the home run —his love of baseball, his successes and failures in the game, his joys and struggles … and ultimately his suicide.

About Ault’s suicide, McDaniel — who earlier in the piece called baseball “the best antidote to suicidal thoughts that I’ve ever had” — wrote three of the most-stirring paragraphs I’ve ever read.

“There is a really strange thing that the public does when they think about suicide victims. I think it’s a kind of lack of understanding of what life is like when you feel like the only right choice is to stop being alive. People act like there was a time when it was easy, and then, all of a sudden, it was hard, too hard to handle. Sliding from the top of the mountain to the bottom until you hit the ground. Thud. The end. How tragic.

People don’t realize that the tragedy of suicide is not a tragedy of descent. The ending is tragic, but the life is not: the life, however long it was, is a shining document of victory. Every day lived a marvelous, impossible transcendence of hope over despair. I read Doug Ault’s interviews, every single one of them that I could find, dozens upon dozens, and every word he said about how he felt like a failure, how he got down on himself, was achingly familiar. I marveled at how he was able to achieve all that he did. Because I put myself into a coma at 17, having done absolutely nothing, and I only survived due to sheer luck. Doug Ault knew the darkness, and he lived to age 54. He had become one of the best people in the world at his chosen skill. He had helped hundreds of others master it. He was a kind, easy-going person. He loved his family, and he loved baseball.

Doug Ault’s life was not a tragedy. It was not a rise and fall. It was a life in which joy triumphed, day after day after day, until the one day that it didn’t.”

From then on, I have read everything I could find by RJ, whether it’s about baseball, shows I’ll never watch or anything else.

I don’t even remember why I clicked a link in August 2018 to a blog post by a woman explaining why getting married at 22 was right for her, even if some people may have found it baffling.

After all, I was 46, and I got married when I was 30, so it’s not like I could really relate to what she was saying. But that blog post led to Savannah becoming one of my first blogger connections (and I hers), which has allowed me to, among other things, follow the adventures of their now-giant puppy Wally, buying and building a home and continuing to grow into what she calls their middle-of-the-road love.

We have also agreed to disagree on mint chocolate chip ice cream. She loves it. I can’t stand it.

All because, for whatever reason, I clicked on a link a few years ago.

“I have many friends. I thought I had a best friend, but it turns out that I made so many friends over the years that I can’t claim one person to be the one. All my friends, my family, my husband… all hold keys. They all have a special place in my heart and my life for what they do and what they bring to me.

The girls will find this out as well, They hold keys for their brother – whether they like it or not. While he may go to Gretchen for assistance when she’s around, he knows that Olena will, in her own way, always make sure someone is doing right for him.

This will never change. And right now they can be angry and mad or apathetic and worried about what their friends might think. Their lives are on the cusp of changing in huge ways. As is Theo’s. But his path will be different. It always is different.”

— “We all hold keys,” My Life In Triplicate

Alexia and I have a friendship that’s pretty typical for people our age.

Which is to say we went to college together, but unless there was a Reunion Weekend I have forgotten about, we  haven’t seen each other since then. Therefore, our friendship has been sustained primarily by Facebook …

… and her blog. She’s actually one of the two bloggers I follow regularly who I’ve actually met. (Jamie, who teaches my exercise class, is the other.)

Alexia and her husband have triplets in their early teens — hence the name of her blog — one of whom is on the autism spectrum. She’s a terrific writer, but the fact that I know the kind of people she and her husband (who I also know from college, since that’s where they met) are, it does hit a little different to read about her daughters asking questions about their brother.

I don’t know when I’ll be in Utica again, but whenever I am, I have to try and get together with Alexia and her family.

“There are two things that have been mentioned in every dating profile I’ve ever created: I’m looking for a feminist, and I’m looking for someone who understands that curly fries are the best type of fry. Because understanding this universal truth is that important. I consider it one of my fundamental beliefs. I even put it in the intro to this blog. This is a battle I am willing to go to war over. If you think anything, anything is more important than your favorite type of fry is, you can GET OUT.”

Renata is wrong about French fries, because curly fries are not the best and steak fries should be at or near the top of the list, not the bottom where she has them.

But, misbegotten opinions about fries aside, Renata throws everything she has into what she writes. It’s what I enjoy the most about it.

There are lots of reasons why you can appreciate someone’s writing. Beyond the people I’ve already mentioned, there’s Rosie’s thoughtfulness, Pea Green’s and Lindsay’s takes on family life (even if they approach the subject from different angles), Becky’s thoughts on “life, adulting, sports and everything in between,” Vee’s combination of goodness and having no patience for fools, Paul’s and Michelle’s well-honed sense of the silliness in life, Jackie’s love of not just baseball, but the odd corners of the game; and Claire’s navigating of the space between motherhood and not wanting to be “just a mum.”

But even that runs the risk of putting people in boxes, especially since there doesn’t even have to be a reason to like anything.

Even if Drake is “Michael Jackson, The Beatles, and Taylor Swift rolled into a single artist who has mastered the most popular musical genre on the planet,” I couldn’t name one of his songs if you hit me in the head with it. However, someone tweeted an article about his hit-making mastery not being accompanied by growing with his audience, and a curious click turned into an appreciative read.

What makes writing great is that it makes me — makes me think, makes me chuckle, makes me reflect, makes me argue … makes me wonder why a fictional character in Maine can’t extract his head from his rear.

Most importantly, it makes me want to read more.