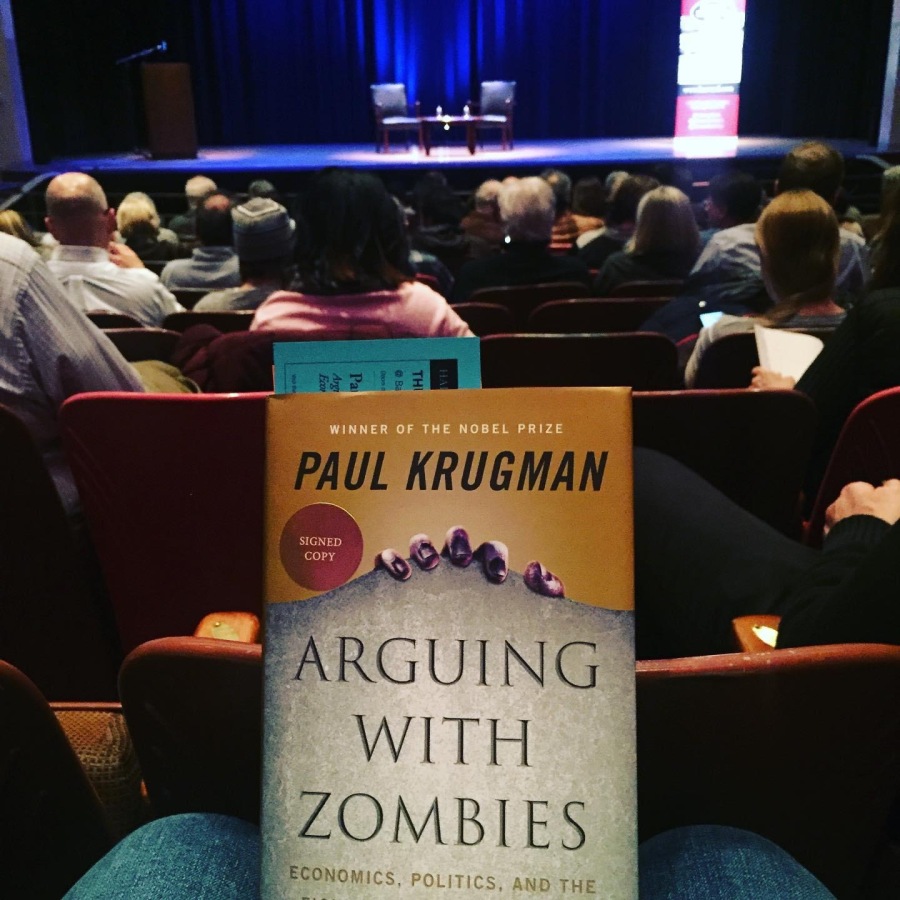 There’s a local bank here outside of Boston — we think it’s this one — that has an ad where a mother asks her daughter about school that day, and the daughter replies that someone from the bank came to speak to her class.

Mom is surprised that an actual human being would come to class, and the ad (which I couldn’t find online) goes on to talk about the bank’s personal, human touch separates them from the competition.

Since I love picking apart commercials — which I’m sure would be awesome to break out at parties if I ever actually tried it — I started wondering what it would be like if an automated phone system paid a visit to the classroom.

”Press 1 to learn about savings accounts.”

”Press 2 to learn about interest rates.”

At which point Suzi dropped “Press 3 to hear Paul Krugman rant about debt.”

Suzi has fantastic comedic timing, so I started laughing hysterically.

For the uninitiated, Paul Krugman is a Nobel Prize-winning economist, college professor, author and New York Times columnist who frequently writes that government debt isn’t always a bad thing and suffers fools so poorly that when George Clooney went for a very un-Clooney look in “Syriana,” the end result looked enough like Krugman that someone made a meme out of it.

Stands to reason that Paul Krugman is tired ^_^ pic.twitter.com/EVhke0M0Dt

I get that Suzi’s joke was probably of the “you had to be there variety,” but … well … I was there.

“It has long been a chestnut of pandemic wisdom that the world pre-Covid feels like a foreign planet than the one we currently inhabit. But how foreign? To remind myself what my life was like last year at this time, and how different it is now, I thought I would go back into my email out-box and see what I was talking about then. Suffice to say: I am not talking about any of this now.”

“Ten Emails I Sent One Year Ago Today,” Will Leitch

I send very few emails, and the only texts I sent Suzi on either side of today a year ago were making sure I bought the right stuff in the grocery store and reporting that I had just left a meeting (which, now that I think about it, is pretty Before Times) and that they were playing Mumford & Sons when I walked into Staples.

But what did I write on this here blog a year ago? Nothing today, but a couple days before, my weekly roundup led off with one of my favorite stories of the year — the dude who couldn’t give his name for a story about a marina closing because his wife didn’t know he owned a boat.

I’m thinking there are some possibilities:

1. He is a genius who has managed to concoct a watertight story to conceal the fact that he owns a boat from his wife.

2. His wife is clueless.

4. She’s hiding something of her own.

Which do you think?

Since I don’t think they guy is a genius, I found his dopiness funny back then, and without any update I could find, it’s even funnier now to imagine that he hasn’t been able to use the boat for a year and is still trying to hide it from his wife … in quarantine.

Or he long since cracked under the strain or his wife called him out and he’s spending more time on the boat that he ever planned … as in, all of it. Either way, still funny, and he should have just told her right at the beginning.

Leitch’s point was that so much has changed in a year, but with things starting to look better, it’s not far-fetched to think that within a year we’ll be emailing each other about Little League practices, travel abroad and seeing favorite bands in concert.

I’m not necessarily quite that optimistic (although this helps), but I appreciated the remind that in spite of ::gesticulates wildly at all this:: that sometimes stuff is just funny and it’s good to have a laugh.

Suzi took the photo when was saw Paul Krugman speak last February. (Talk about the Before Times!) Her Facebook caption was “Here for my favorite cranky New York Times economics writer.”