Because we actually got the leaf guy to come last fall, we don’t need him now, but when he comes in the spring, he also cleans up the yard and puts down mulch.

Instead, Suzi and I going to do it, but we need mulch.

Hence the trip to Lowe’s. (We’re also going to order takeout from the nearby Cheesecake Factory.)

“…is not going to just sit around all day.”

I’m not entirely sure what had me so bored 11 years ago that I felt a need to proclaim to my friends that I was actually going to do something, but we wound up taking our pretty-much-annual trip to Kittery, Maine, and Portsmouth, New Hampshire, that day.

Maybe the weather was just horrible for the previous few weeks. This year’s decent weather aside, it was April in the Northeast, after all.

Thoughts & prayers during this difficult time are appreciated.

But whatever it was, it wasn’t something like … you know … which turns going to a home-improvement store and grabbing food into a veritable adventure worth getting out of sweatpants.

It’s even fairly warm today, so not only am I rocking jeans, I pulled out a short-sleeve shirt. 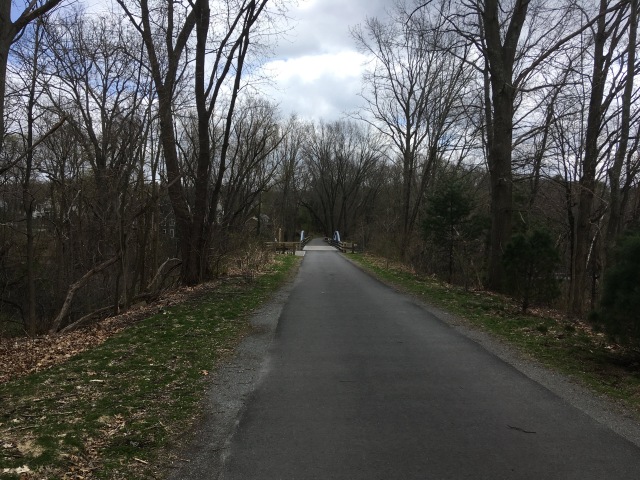 In addition to our regular walking trail, there’s one following old railroad tracks in the next town over, but we had never gone until we decided to give it a shot the other day.

We walked a little more than two miles — from the parking lot to the end of the trail, plus a mile out and back on the trail itself — and while the scenery wasn’t terribly different from what we’re used to other than more houses backing up to the trail, it was a nice walk and we’d do it again.

Plus there are other parts of both trails we can still explore.

It made for a nice break from the routine.

“I’ve done all sorts this year to push me out of the norm. Starting new jobs, solo travel, learning new skills ….. sitting on the roof ……”

— “Staring into infinity,” On The Fly

“Bored” isn’t the word for the feeling.

I’m OK with what we have to do right now — as much as I like bowling and as badly as I need a haircut, I’m not making a break for Georgia — but it feels like I need a little break from the routine, something to stretch my mind out, an adventure for my brain.

I just don’t know what that is yet.

I’ll have to figure something out.

All good ideas are welcome.

9 thoughts on “Looking for a little adventure”