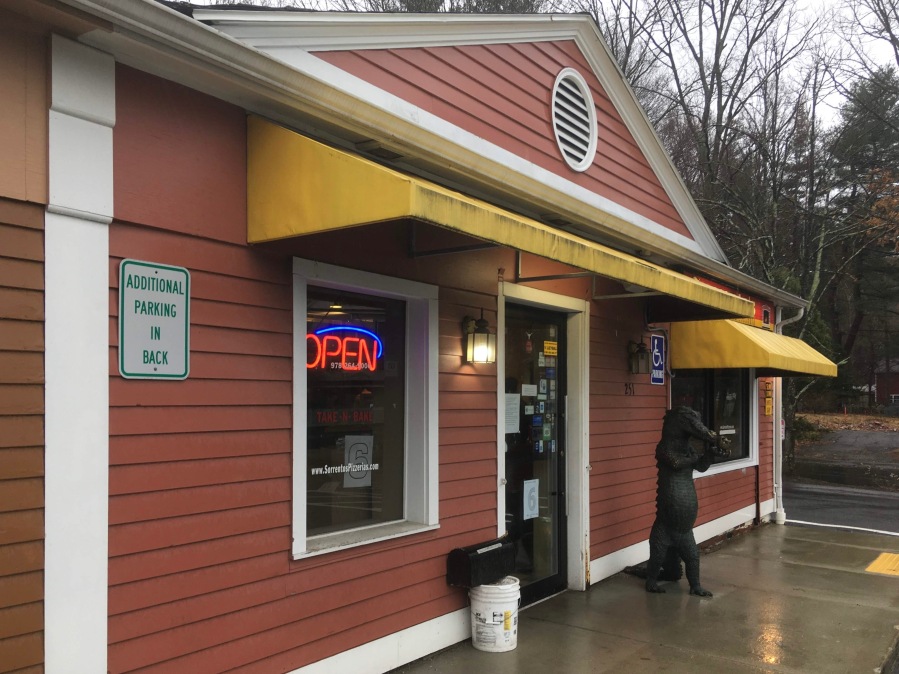 I was dispatched to get the pizza.

There wasn’t any particular reason, except Suzi had taken the car out a couple days ago to go grocery shopping, and I hadn’t since the weekend, when I went to the drugstore down the hill to grab a subscription.

She figured she didn’t want to have all the fun.

The good news is that our dining room wasn’t the usually cramped restaurant. The bad news is that we didn’t have our usual dinner entertainment of people trying to parallel park outside and the occasional book-signing.

When we found out The National Theatre streaming plays on its YouTube channel for at least the next four Thursdays, we decided to treat it like an NT Live night at Coolidge Corner Theatre in Brookline, but from home. At least we didn’t have to deal with the usual horrible traffic.

We always start the night by going to Otto, a pizza place across the street from the theater. And since we always get meatballs with our pizza at Otto, we picked the Sorrento’s by our house, since it also had meatballs on offer.

The good news is that our dining room wasn’t the usually cramped restaurant. The bad news is that we didn’t have our usual dinner entertainment of people trying to parallel park outside and the occasional book-signing.

Overall, though, no complaints.

Like most people, we’re trying to figure out what to do for entertainment these days. Last weekend, we watched a miniseries of Agatha Christie’s “And Then There Were None,” and we also hammered through the entire six-episode third season of “The Windsors” in one night on Netflix.

There were plenty of laughs, but overall it seemed like the usual formula for sending up the British Royal Family was just a tad off.

But mostly we’ve been turning to “Succession” on HBO, which Suzi has taken to calling “The Kendall Roy Variety Hour.” We had heard a lot of hype about it, so we decided to give it a try because … why not?

We’ve only watched six episodes of the first season — so no spoilers, please — but we’re transfixed, and we’re becoming Kendall fans.

The entire Roy family falls on a spectrum between vile and sociopathic, and Kendall fits in well, there but there are enough moments mixed in the malevolence that make you want to see him get it right.

Plus, they’re all idiots, but love to dump on him all the time.

But it’s early yet. Things could change.

Just don’t spoil it for me.

We usually have time to kill after pizza, which we spend at Brookline Booksmith just down the street. It’s where I fell victim to Whamageddon last December.

It has a good selection of books, plus “Bitch, Please. I’m From Brookline” coffee mugs for the tough guys in the local independent bookstore set. The closest thing in our cabinet is a “Leader of the Opposition” coffee mug Suzi bought in London to send a message she’s pretty sure no one in her old office got.

Unless you want to count my bumping around on Amazon — I have a birthday next month, after all — there really was no parallel at home, so I’ll write instead about the book I finished earlier in the day, “Maybe You Should Talk to Someone” by Lori Gottlieb.

Right around the time it was on a list of books I could buy with an Amazon credit, my blog buddy Becky over at Strikeouts + Sprinkles wrote it was one of the best books she had read last year. When I asked her about it, she said she’d recommend it to anyone, so I bought it.

Somewhere down the line, I owe Becky one, because it was a wonderful book: touching, at times funny, thought-provoking and just brilliantly written. As I got closer to the end, I read faster and faster to see how the stories turned out, while at the same time not wanting it to end.

But with no need to stop and look at books, it was on to the show.

Before the screenings begin, there are usually a few minutes of promotional videos for sponsor Sky Arts and NT Live, which always mentions “One Man, Two Guvnors” starring James Corden.

I, like most Americans, probably think of Corden as a late-night talk show host, but after his turn in London in 2011, he brought Francis Henshall to Broadway and won a Tony in 2012, so I was happy to see it was the first play available on YouTube.

It … was … hilarious. It was about two hours, 40 minutes long, and we hardly stopped laughing the whole time.

Then Suzi went upstairs to read and I gave our cat Sasha her nightly feeding. Our house doesn’t have the atmosphere of the theater, but you can’t beat the traffic.

Don’t believe me when I say how good the play was? Push play on the video above, at least until April 8. The whole production is right there, and it’s free.

I don’t know who will drive to pick it up.