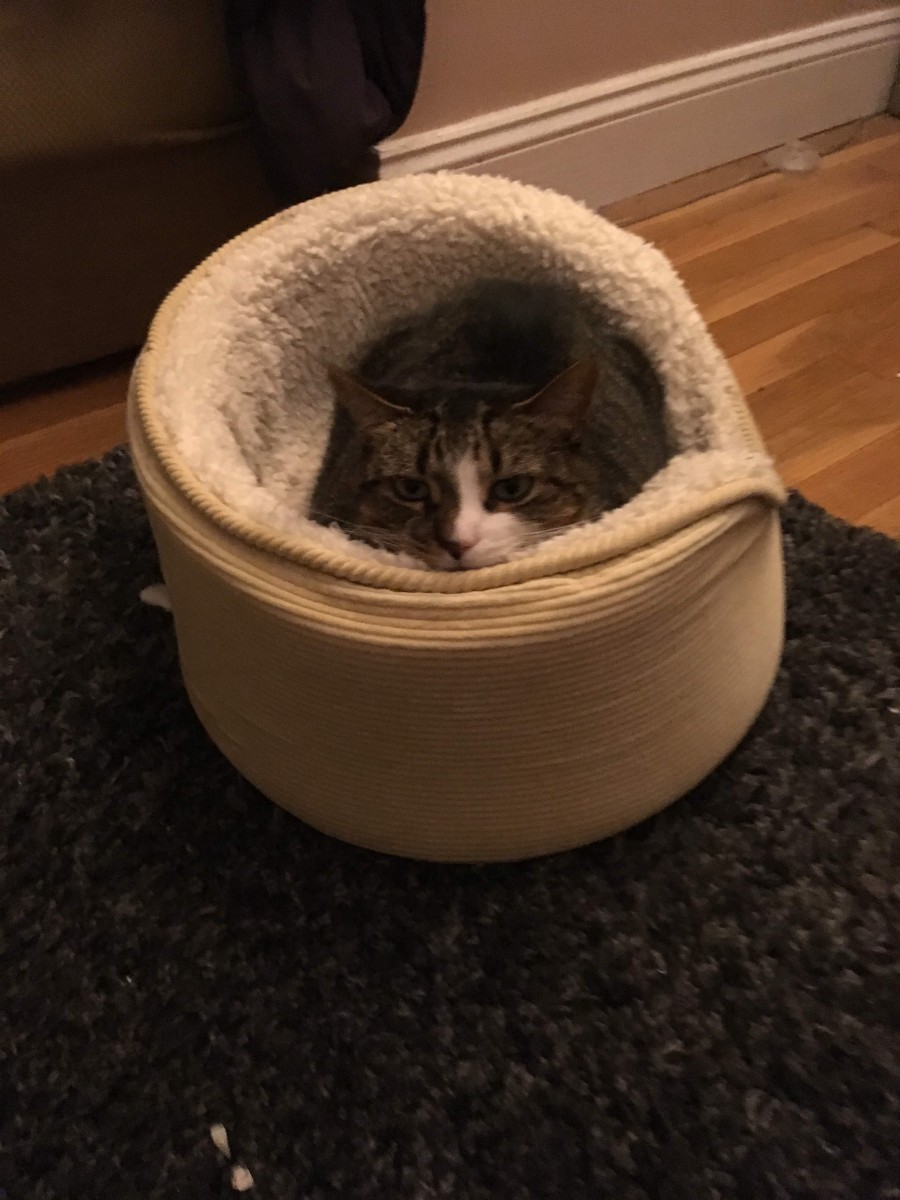 Sasha got a cat bed a few weeks ago.

Suzi’s parents had an extra one, so they washed it and gave it to us.

At first, she didn’t want much to do with it, but then Suzi moved it to our TV room, and soon she spent 48 hours in it, basically only coming out to eat.

And she has hardly sat in it since … until this morning, when we came back from the gym to find her there.

STUFF I WROTE THIS WEEK

Photo gallery: Winter in Cape Cod — All of the beaches, almost none of the people.

To anyone getting a Christmas gift from me, I apologize — I’ve wrapped one gift and already screwed it up. This is not a good sign.

Also, get yourself a friend who sends you articles arguing that people may be happier to get gifts that are wrapped badly.

Festive Falmouth at Christmas — We still miss the Christmas display we used to go to before we moved too far away.

A cozy winter tag — I answer a series of questions about winter, including my favorite seasonal food.

Some serious five-finger discounts — Looking for a new TV? How about a bathroom sink? A grand piano, perhaps? Have you considered your local hotel?

We all want the same thing — Online … offline … whenever we interact with the world, everyone has the same goal.

THIS WEEK’S BLAST FROM THE PAST

Having to learn to write again — It’s really pathetic what has happened to my handwriting, and it shows up every year at Christmas card time.

STUFF I READ THIS WEEK

What Is Supposed to Happen at the Winter Meetings? (Rachael McDaniel) — Rachael’s writing is so good, and I wish there was a lot more of it.

Taking In A Moment (Rosie Culture) — Great advice … if only I were better at following it.

My Anti-Bucket List (CPFalcone) — As someone who is anti-bucket list because it acknowledges that I’m going to die someday, I am here for a list of things I’ll never do before that day comes.

81 Thoughts I had While Watching the New Grinch Movie (Buffalo Sauce Everywhere) — I’ve never seen the movie, but I’m not sure I have to now.

Decking the Halls (Strikeouts + Sprinkles) — I haven’t had a real Christmas tree in years, but this sounded like fun.

They don’t have to be ugly: holiday sweater gift guide (Sunshine With Savannah) — There’s some good-looking stuff in here, folks.

Adventures in job hunting: they called the wrong candidate (Millennial Life Crisis) — Sometimes you do dumb things like call the wrong job applicant. Just take the L and move on.

Algorithms: The New Bad Boyfriend (Lisa Arbetter) — I tried to make algorithms funny. She actually pulled it off.

My alma mater, doing it right once again.

Still not convinced this place is real.

Me showing up at the Christmas party: hi I’m here to ruin everything

This is what we have to deal with.

I live in Red Sox Country. I always wear my #Yankees hat, and often have to deal with all kinds of comments. Last night at the grocery store, the checkout kid asked me if I'd seen who the Yankees signed this week. I might live in Maine, but I don't live under a rock. Sox fans…

Among his other accolades, I believe we can declare John Legend to be king of the low-key, in-through-the-side-door brag.

Btw this reminds me of my wedding. We had a lot of black guests, including my family. But plenty of non black guests as well. Stevie Wonder did an impromptu performance of "Ribbon in the Sky.". I did not know til then that that song was blackfamous. But it definitely was.

In honor of watching “Kinky Boots” and “Jesus Christ Superstar” the last two nights, I leave you with two of the greatest singers on God’s Green Earth — Killian Donnelly and Sara Bareilles.