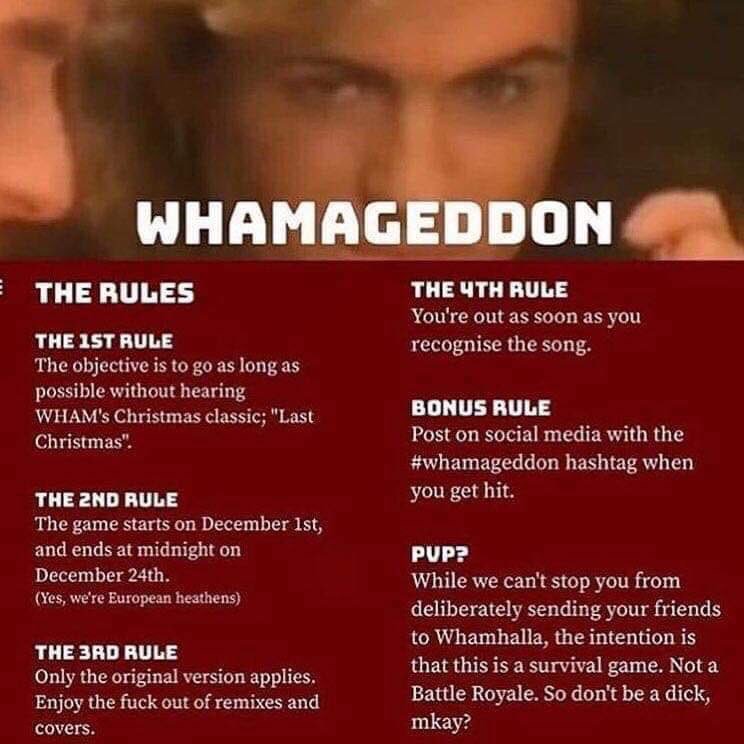 It happens when you least expect it.

It was a little after 6 p.m., perusing items at Brookline Booksmith, passing time before Suzi and I went to see the NT Live production of “Present Laughter” — a raucous exercise in scenery-chewing starring Andrew Scott — when without fanfare, the first notes of my doom played from the speakers.

I had met my Whamageddon.

The sad irony of a game in which you “die” when you hear “Last Christmas” by Wham! (in other words, if you’re still in the game DON’T PLAY THE VIDEO ABOVE) is that it’s a really good song.

It’s not like it’s a Christmas song by Coldplay, which like most anything else of theirs, makes one long for the sweet release of death.

Also strangely and cruelly ironic, when the One Great Songwriter came to mark against my name, a few shelves below where I was looking was Andrew Ridgeley’s “Wham! George Michael and Me: A Memoir.”

As it was, I was only alive because of two technicalities in the rules.

I’m pretty sure I heard “Last Christmas” a couple weeks ago, but it doesn’t count before Dec. 1, and neither do covers like the one on NBC’s entertaining-yet-interminable “Christmas in Rockefeller Center” broadcast.

Our man Dating Dad had a different problem. (The language doesn’t bother me, but if it does, be warned.)

I am livid. LIVID!!! Get a voicenote. From someone I NEVER get voice notes from. Open it with more than a hint of excitement. IT’S LAST FUCKING CHRISTMAS BY GEORGE FUCKING MICHAEL!!! I’m out of #whamageddon!!! @KateMcLoughney; revenge shall be mine. Some day. Somehow. pic.twitter.com/7f3yONdVHv

Turns out, you need to beware a Whamssassin with nothing left to lose.

I've been out since midnight of the 1st December, so it's okay 😂😂

Our man decided to take it to the people. He’s a good follow, but I thought people were going to vote him out, even if sending the song to a friend is dirty pool. I didn’t vote, since I didn’t want the awesome responsibility of holding a man’s Whamageddon life in my hands.

In the end, the people came through for him.

Yesterday the dastardly @KateMcLoughney whammed me via voice note, which I thought put me out of #whamaggedon. However, lots of people have told me that as it was a Whamssassin attack I’m not actually out. Tell me, Twitter; am I still in the game?!

But I’m sure he must know that any reprieve is temporary, that the end is coming …

… when he least expects it.

Ask not for whom the Wham! tolls. It tolls for thee.

Graphic of the rules (including the profanity that I didn’t know how to erase) from Twitter.