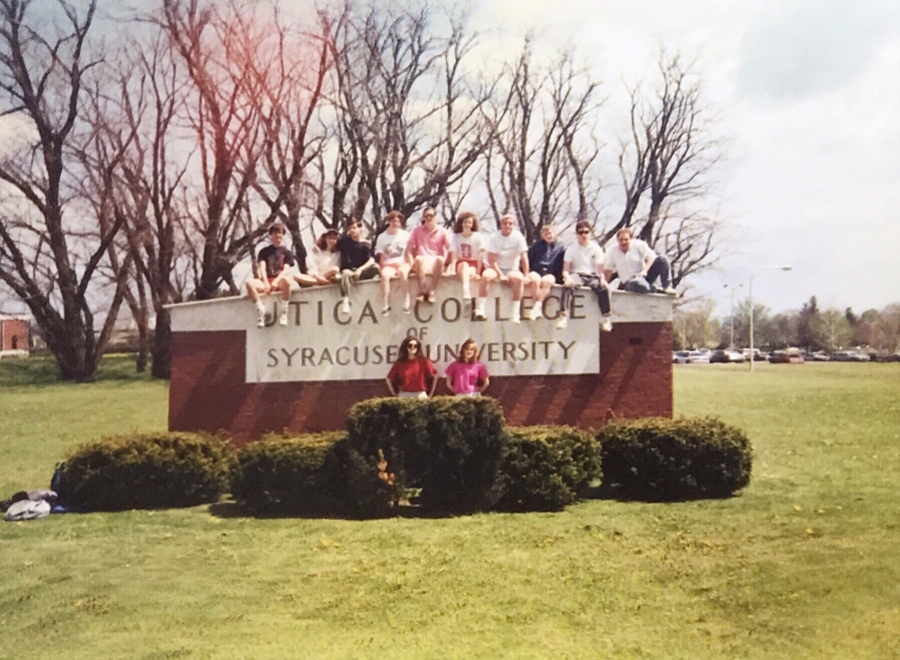 If there was one thing I was certain about as a teenager, it was that I would go to Syracuse University.

After all, I was going to be a sports announcer, and Syracuse had the best school for that in the business. The list of alumni proves that.

But for a kid growing up near Albany, Syracuse was my school — the school of Don McPherson playing quarterback and “Pearl” Washington at point guard.

So of course I was going to go there …

Where did you ALMOST go to college?

I started getting brochures maybe in my sophomore year, definitely my junior year, plus my mom picked up a giant guide to colleges.

We were looking for schools in New York, or pretty close, with communication programs, and there were a lot of them.

From there, I narrowed the list to five, and got accepted to all of them. Syracuse was obvious, but also Ithaca, Geneseo, Castleton State and Utica College. I also took a tour of Marist.

Ithaca, Marist and Geneseo didn’t do much for me, so I didn’t really consider them after visiting.

Castleton was not that far over the border in Vermont, and the school even arranged for me to take my tour from one of their guides who went to my high school. The tour was nice, and even better, they were offering a scholarship worth full in-state tuition, which wouldn’t have covered everything, but it wouldn’t have left much.

Syracuse was … huge. When the closest campuses were SUNY Cobleskill, the local two-year college, and SUNY Albany (now the University at Albany, where I went to grad school), Syracuse was like a city of its own.

Yeah, that was comforting. And yes, there was a time when tuition of $17,000 seemed like a lot of money.

I liked it, but it was all kind of scary.

And then there was Utica College.

One day, my father came home from work and said a guy he worked with told him about a school in Utica that had a really good communication program and was part of Syracuse University.

But we had been doing our research. There were all the brochures, the guidebooks, and none of them had mentioned Utica College.

So my attitude was basically, “Yeah, whatever.”

Not long after, SUNY Cobleskill had a college fair, and my mom and I went because some of the schools I had been looking at were there. We checked all those out, and literally as we were walking out the door, my mom noticed the Utica College booth.

We were still there, so what the heck? We checked it out. The admissions officer was really nice, so we set up a tour.

The tour felt … comfortable. It didn’t take long for the place to grow on me.

But Syracuse was still Syracuse. It was always where I was going to go, right?

Much as I liked Castleton State, the town was too small, too much like where I was from. I wanted something different.

Yet when it came time to decide, I couldn’t. Finally, my parents told me I had to make a choice.

In the end, it boiled down to being comfortable versus being scared.

So I chose Utica.

What if? What if I had gone to Syracuse, like I always believed I was going to?

Everything in my life would be different, and I don’t know if it would be better. Sure, I might have gotten my degree from Newhouse, and between what I learned, the power of a Newhouse degree and the connections it comes with in the communication business, maybe I would have gone on to big things.

But I might have washed out, overwhelmed by the demands and the competition. I like to think I could have kept up, that I had the intelligence, the desire and the ability, but you never know.

And depending on how my career went, maybe I still would have wound up in Massachusetts, or stayed in New York or been somewhere else entirely.

Given that we met through work, any different career path means I almost certainly wouldn’t be married to Suzi, which is Exhibit A for why I’m happy with how things turned out.

But even though Syracuse would have had its own experiences, and I’m sure I would have made plenty of friends, I wouldn’t have had the experiences I had in Utica or made the friends I made.

And it’s inconceivable to have not had them in my life.

Students just went back to UC, or moved in for the first time if they’re freshman.

I could give all the advice I want, but I just hope they end up feeling about Utica College the same way I do.

Because memory will do what it does, I forgot about Geneseo until my mother reminded me about our “infamous” trip there, by which I believe she means my brother and I acting up in a parking lot and her saying that if we didn’t cut it out she’d … clearly at a loss for words at this point … “spit in your face.”

3 thoughts on “The decision I never thought I’d make”