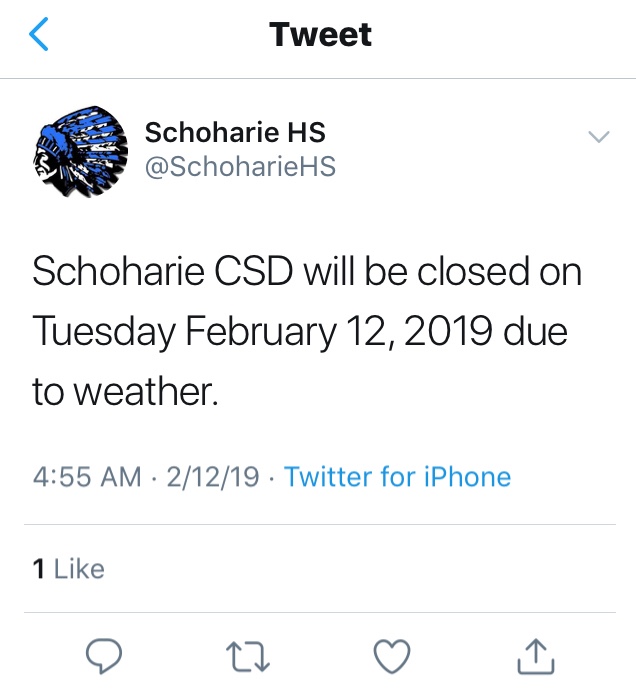 To all the young folk out there, your old pal Bill has an admission to make.

When people my age talk about walking to school uphill both ways in the snow, we’re lying.

Walking was only a last resort when the chains on the tires of the school bus wouldn’t suffice and there weren’t enough wooly mammoths to go around.

Because we never canceled school for snow.

Still, we could dream.

When we got a snowstorm, we’d find out if school was on schedule, an hour late, two hours late or closed (except school never closed, remember?) by clicking on the radio.

In those days, unless you had a portable radio, the stereos came in two sizes — giant and two-person lift.

Once you clicked the dial and turned the knob to make sure the frequency was just right, Don Weeks, the genial voice of God mornings on 810 WGY, would read through the school closings and delays.

WGY covered a huge area around Albany, and it was a selling point that they had the most-comprehensive listings, so children from all around would half get ready as they hoped to hear their school’s name.

We’d listen for other schools to see if there was any kind of a thread, but there was one school we listened for more than any other.

I grew up about a mile from the line separating the Schoharie and BKW districts, but it wasn’t just the district line, it was the county line … the Albany County line.

Yes, Berne-Knox-Westerlo was in Albany County, making it an early district in an early county.

Didn’t matter, though, because we never closed. We’d eventually shuffle off to school, wondering why other kids got to stay home.

(By the way, no one my age who grew up in upstate New York will ever admit their school ever closed.)

Is it better, more informative and efficient? Of course it is.

But it can’t be the same.

Of course, what do I know? School never closed when we were growing up.