There was a moment, I believe during “Believe,” where Marcus Mumford, surrounded by fans on all four sides of the stage-in-the-round at TD Garden in Boston, leaned over the rail and held out his arms.

As the crowd adored him and he adored right back, the look on his face said, “Man … this is fun!”

Of the three concerts I’ve been to this year — Sugarland and Josh Groban were the other two — Mumford & Sons was the one I was probably least interested in to start.

I don’t dislike them. I’m familiar with at least a few of their songs and find them to be a perfectly good band, but Sugarland is my favorite band and Groban has long been one of my favorites.

But we went to see Mumford & Sons because my wife wanted to go. In fact, as we got off the train before the concert, she asked how many sporting events it would take to make up for her “dragging me” to the show.

Given that she only had passing interest in Sugarland before we went to see them, I told her we were even. 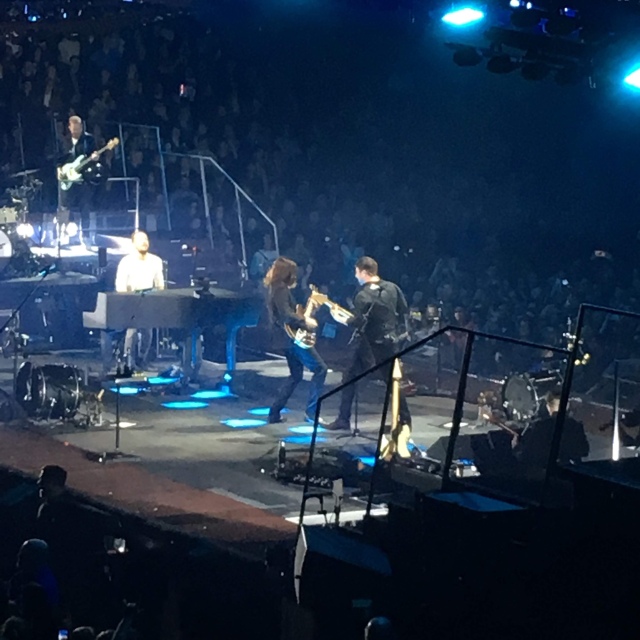 Since I wasn’t hyper-focused on the music to the point where I was almost unaware of the people around me, I paid at least a little attention to the crowd.

And after a few songs, it hit me.

They said it was a Mumford & Sons concert, but it felt more like a revival.

The tent was TD Garden, the holy artifacts the Bruins and Celtics retired numbers and championship banners hanging above.

And no one around me, or that I could easily see, was sitting.

For the better part of two hours, they were on their feet, singing, dancing, jumping, waving their arms. (I only sat down for a couple minutes in the middle of the show, while the band was on the other end of the stage, because my back was getting sore.)

Even if you didn’t know all the songs, which I’m guessing most of the people there did, the energy was intoxicating.

Of course, every good revival needs its priest, and that would be Marcus Mumford — singing, playing guitar (sometimes while pounding the foot pedal on one of the drums) and on the keyboard, he had an arena full of people hanging on his every move, every word.

And when he walked through the congregation, including right behind our row, they surrounded him.

Sugarland and Josh Groban (along with his opening act, Idina Menzel … perhaps you’ve heard of her) are terrific performers. In particular, since this was our third time seeing Groban, it was notable to see how he has fully grown into his powers.

But this … this was different.

By the way, don’t be shocked if opening act Maggie Rogers, her hair and fringe on her shirt spinning as she twirled around the stage, becomes a pretty fair preacher herself.

I didn’t even know who she was before the show, but I think I’m going to have to change that.

The tour moves to the World’s Most Famous Tent … I mean, Arena, Madison Square Garden, for the next two nights.

I have a feeling that’s going to be a hoot.

16 thoughts on “Welcome to the Church of Mumford”