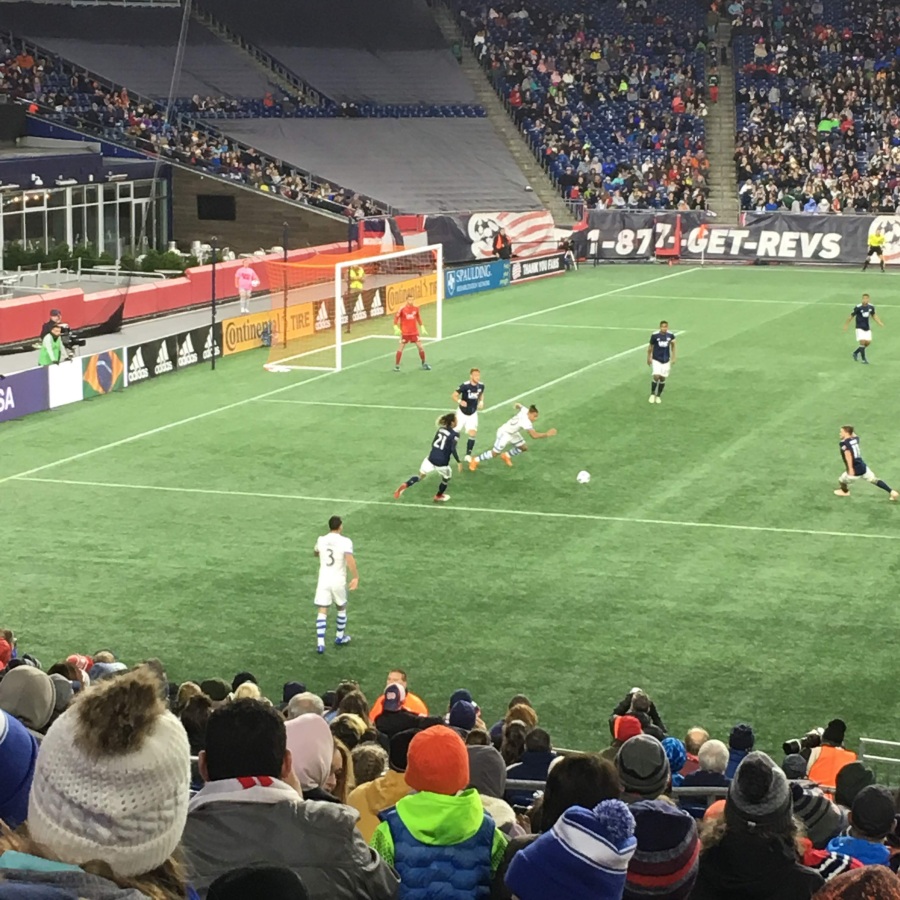 Walking up the ramp at Gillette Stadium, a familiar feeling came over me.

Almost involuntarily, my legs felt like they were walking less and pulling me more, pulling me toward my seat, toward what was awaiting at the top of the ramp.

I just wasn’t sure I was going to feel it this time. 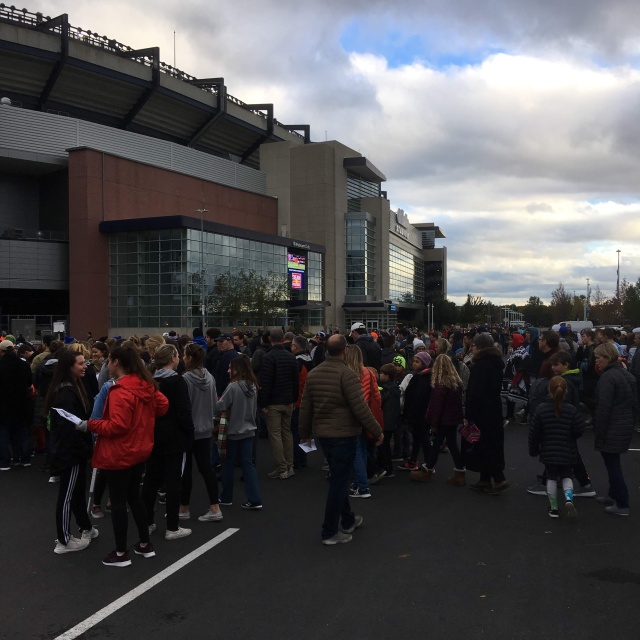 Assuming it was warm enough — which is to say I wasn’t at home in the Northeast — I’d watch 8-year-olds play baseball on Christmas morning.

Unless it’s the Red Sox playing to win the World Series, not only will I watch baseball whenever, but it almost doesn’t matter what level. I don’t get quite as excited for an A-ball game in Lowell as I do for Yankee Stadium, but my legs start moving a little faster the closer I get to the ballpark.

Soccer, however, has been toward the other end of the spectrum. I’ve only been a regular watcher for about the past 10 years, and I’m not at that “watch anything, anywhere” phase yet. Basically, I watch the big international matches and the English Premier League.

So even though the New England Revolution Major League Soccer team is less than an hour away, I had never gone to a game, and only watched games in bits and pieces on TV. I  knew I should give it a try, but hadn’t been motivated enough yet.

After all, one of the best leagues in the world was on my television every weekend; I wasn’t ready yet for a league that seemed made up of players who either couldn’t make it in one of the top leagues or former stars getting one last high-paying gig, especially since Steven Gerrard never played at New England during his time in MLS.

But then one of my wife’s coworkers got tickets to New England’s game against Montreal, and when she invited us to go, I didn’t hesitate to say yes.

After all, it was still a game.

Granted, I didn’t know much about either team, just that the Revs weren’t very good, play games in a football stadium where a good crowd still meant it was two-thirds empty because they haven’t found a place for a soccer stadium yet and finally just broke ground for a training facility.

However, I wanted to go in with an open mind, wanting the answer to one question.

If I went once, would I want to go again?

Aside from a Liverpool exhibition at Fenway Park, the only professional soccer game I had ever been to was at Fulham during a trip to London five years ago.

It seemed like the classic English football experience — get off the train, stroll through the park to get to the classic ground smack-dab in the middle of a neighborhood.

This … this was not that.

This was driving to Patriot Place, a shopping, entertainment and restaurant complex (our pregame meal was at an Italian restaurant; it was quite good), with Gillette Stadium as the anchor.

The stadium is large, modern, pristine; Outside, there was a place for children to play while country singer Ashley Jordan (I had never heard of her) performed.

So it was different, but that’s all it was … different. For where they are, it worked just fine. 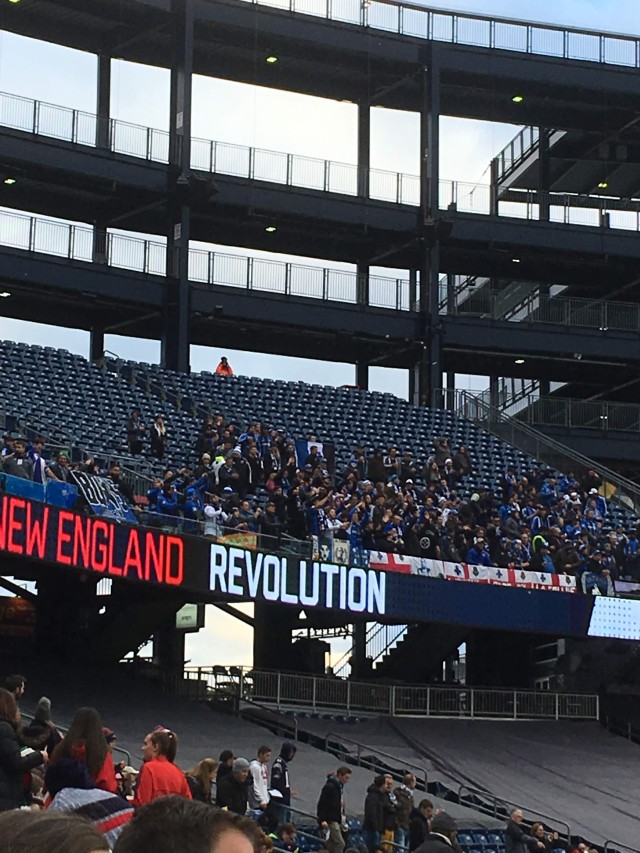 What about the game, though?

For a half, it was pretty dire stuff. However, it didn’t feel dire in the sense of “wow, these guys are really terrible,” but just that these were two teams having trouble finding a way to generate offense.

And you can see that anywhere.

But it was still fun. There was still the anticipation that maybe this possession would generate a good scoring chance. The crowd was maybe 10,000 for the last game of the season on a chilly evening, but everyone seemed to be having a good time, especially the Montreal fans in the corner above us. (I read later on that it was actually 28,000, even though I thought soccer capacity was only 20,000. This shows that 28,000 in a football stadium looks puny, and that I’m absolutely terrible at guessing attendance.)

They clearly had the best of both linguistic worlds, chanting most of the game in French, yet able to curse at the officials in English when the situation warranted. 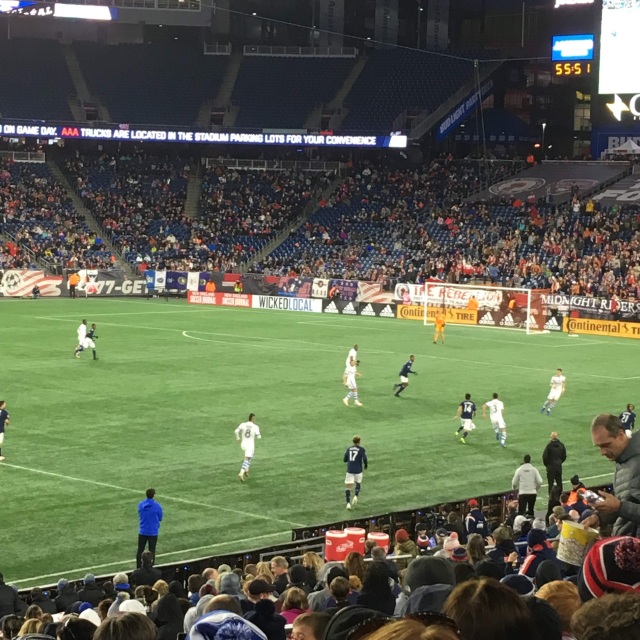 Speaking of dire offenses, the Fulham-Stoke game we went to in London was a slog before Fulham scored late, and this one looked like it could be headed for scoreless tie until, all of a sudden, things opened up in the second half.

Maybe it was Montreal realizing they had to win to have a shot at the playoffs, but the chances started to come, and finally, Diego Fagundez got the goal we had been waiting for.

There was much rejoicing. 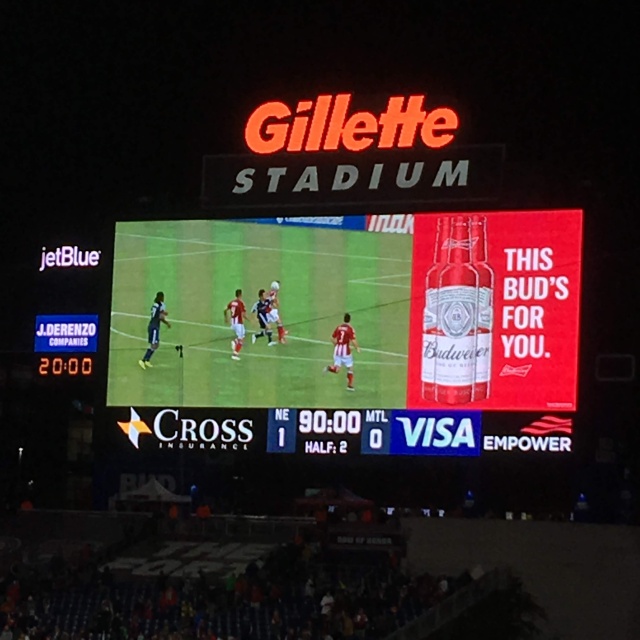 So now that I’ve gone, will I want to go again?

Definitely. It was a great time.

Hopefully, the Revolution will be better next season.

2 thoughts on “Something new on the sports menu”