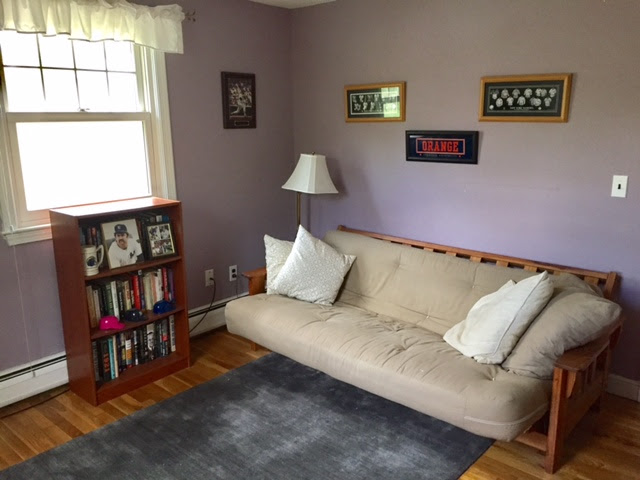 An upgrade to a larger apartment meant an upgrade to a futon from the foam, fold-out couch and bed that I had bought off a neighbor’s lawn for my first studio apartment.

But when my parents and I were putting the futon together, they had to leave before we could attach the frame to the body, so I did it myself.

Everyone, including me to be honest, was shocked that I was able to do it, because I am not exactly known for being mechanically handy, and building things is practically an impossibility.

Destroying things, however, is right up my alley. Once, when my wife and I were putting a new vanity in our bathroom, we had to take the old one out, and I think she and her father were both awed by the devastation I wrought with merely a hammer.

We’ve moved a bunch of times, and the futon is in my sports room now, but it has never been as easy as it was the first time.

Maybe it was lightning in a bottle.

I can appreciate art, but I can’t actually do it.

Not only do I not have the talent for it — in my art classes, I advanced beyond basic stick figure, but not that far — I don’t have that kind of brain. I can’t see or imagine something and think of it as a painting or a sculpture.

In fact, that’s one of the reasons I hate modern art. Even though I’m probably oversimplifying it terribly, I look at it and think, “I could do that.” I want my art to be something I know I can’t do.

So on this National Day on Writing, what do my lack of skill at building things or inability to conjure up a painting have to do with #WhyIWrite?

#WhyIWrite I have a lot of craziness to get off my chest and writing helps me express/understand myself. Plus, as cheesy as it sounds, I have always loved music and the flow of words. Writing stories is like creating music to me. I know that’s corny.

Because while my brain isn’t capable of being inspired to create a painting or sculpture — and people who can conjure up great music are way beyond me — I can walk through Times Square at 8 a.m. on a Sunday morning and feel inspired by what I see and hear around me.

And while I can’t build a futon (or much of anything else), I can take that inspiration and build the words and sentences to describe it.

Writing is what I build, how I express myself.

It’s my hobby, my way of keeping my brain occupied.

It’s as close to artwork as I can claim.

So, far from finding it corny,  I completely get what W.D. Frank is saying.

People don’t realize that the tragedy of suicide is not a tragedy of descent. The ending is tragic, but the life is not: the life, however long it was, is a shining document of victory. Every day lived a marvelous, impossible transcendence of hope over despair. — Rachel McDaniel, “Doug Ault and the Triumph of Joy”

Great writing is also aspirational. When I read something great, not only do I want to read it over and over again, I want to be able to do something like that.

I once wrote about my friend Michael, who died this fall. It was an essay that began with how I'd dumped him on Valentine's Day. There's lots about this old piece that makes me cringe now, but I'm posting it because I miss him so, so desperately today: https://t.co/XJ4sGQFo6N

I’ll probably never get there — after all, the writers I like best are brilliant — but they give me something to shoot for.

And so I will keep writing. I may never reach the heights, but I can always keep trying to get there.