Exactly one year ago, I wrote this.

Of course it’s not fun. It’s gut-wrenching agony, knowing that one bad pitch or one instance of not scoring with runners on first and second with no one out (tonight would not be a good night for the return of the #rispfail hashtag) could mean the end of the season. Tonight is going to be a difficult evening.

Then the conversation reached its obvious conclusion … that the jangled nerves are what make it fun.

And now, here we are again. The Yankees are hosting the American League Wild Card Game again, this time against Oakland.

Luis Severino will be on the mound again.

Nerves will be jangled again. It will be fun again.

Of course, we all know what happened last year. Severino didn’t last an inning against the Twins, but the offense and bullpen picked him up.

Then they went down 2-0 against the Indians, and I wanted the team to leave Joe Girardi in Cleveland.

Then they came back and won; Didi Gregorius was a hero.

Houston was next, and although the Yankees seemed overmatched at times, they went up 3-2, with two shots to win one game to go to the World Series.

But they couldn’t do it, flailing away at one Lance McCullers Jr. curveball after another to end Game 7.

”That’s not so bad,” people said. “They’re ahead of schedule, and the future is bright,” they said.

I wasn’t having it. 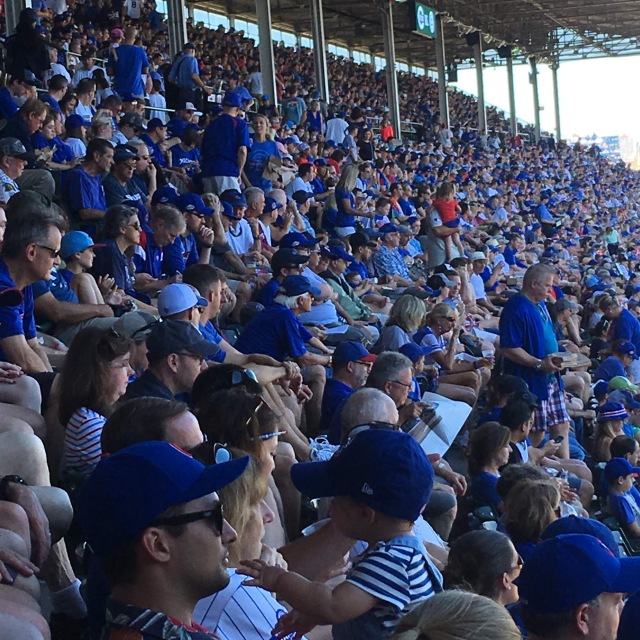 To be honest, between going to Wrigley Field and all the craziness in the National League, I hadn’t been paying much attention to the Yankees as of late.

I watched them clinch a playoff spot, but didn’t even realize they were in position to win their 100th game until I read about them winning their 99th. I thought they had were at about 95 or 96.

After the All-Star Break, it seemed like they were sleepwalking, including four games in Boston where it looked like they wanted to hide somewhere as soon as something bad happened to them.

It has been a weird year. Girardi was out as manager (they let him fly back from Houston), and Aaron Boone was in. I actually found myself explaining that you could have thought Girardi deserved to go and still been unhappy with Boone without thinking Girardi should come back.

The Yankees won 100 games, but it didn’t seem that way (as stated above). After the All-Star Break, it seemed like they were sleepwalking, including four games in Boston where it looked like they wanted to hide somewhere as soon as something bad happened to them.

Had they played at the same pace (38-29) over a full season, their 92 wins would have just gotten them into the playoffs, but tonight’s game would be in Oakland.

They set a record for homers, but where mediocre offensively when pitchers kept them in the ballpark.

If you take away runs scored via HR, Yankees average 2.54 runs per game, 18th in MLB. Red Sox rank 1st with 3.25. This is entering today. Hope that helps.

Every time you turned around, it seemed like they were losing to another bad team, but the only American League team with a winning record against them was the Red Sox at 10-9, and the Red Sox had losing records against every other playoff team.

Severino was great, then he was terrible, and now he seems a little better.

Giancarlo Stanton hit 38 homers … and struck out 40 more times than he ever had.

But I also got to see Aaron Judge homer in person, and that was awesome.

Gleyber Torres was everything they said he would be, and Miguel Andujar was a revelation.

In my bad days, I have to remind myself there was a lot to like about this team.

The journey began in late winter in Tampa, and it brings us back to where we were a year ago.

It could end tonight, or Halloween night with either the ultimate trick or the greatest treat possible.

But there’s only one way to find out.