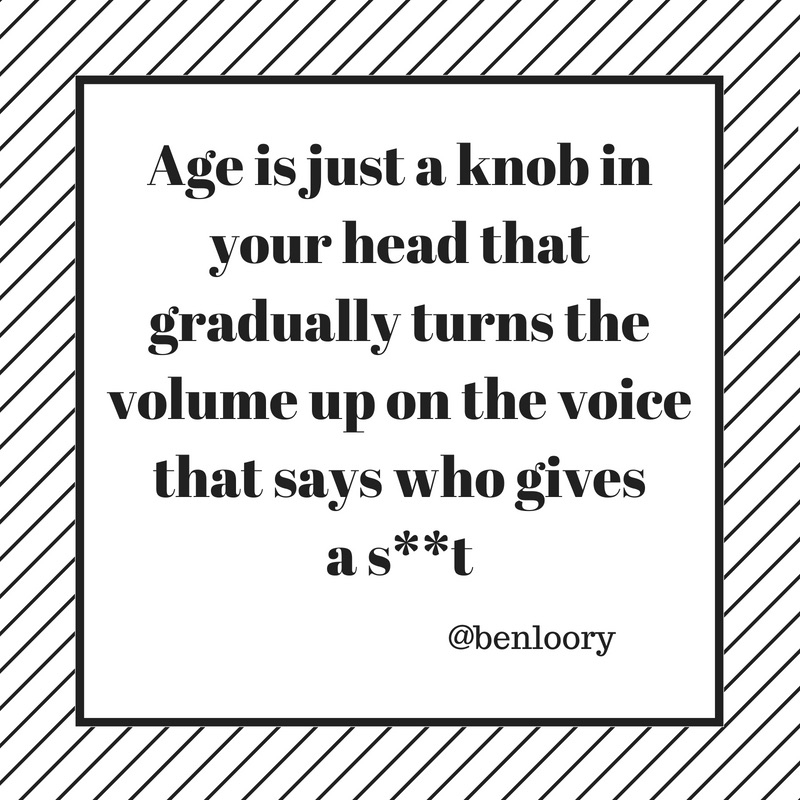 I’ve had a long-running joke with a friend over the time I overheard her at work a few years ago talking about something that happened “in 1996, when I was 5.”

Quickie math at my desk 10 feet or so away determined she was born in 1991, and since her birthday was yesterday, it meant I was between my freshman and sophomore years in college.

She’s now 26, and in her Facebook message thanking people for birthday wishes, wrote that in her head, she’s 24, and “maybe probably likely one of those people who’s going to hit my prime in my 30s.”

With the exception of the first year, her 30s are going to be my 50s. I have no idea where I’ll be in relation to my prime.

Imagine, for a moment, that you had no birth certificate and your age was  based on the way you feel inside. How old would you say you are?

— “The age you feel means more than your actual birthdate,” bbc.com

Apparently, there are studies that show “subjective age” — the difference between how old you feel and how old you actually are — ”can predict various important health outcomes, including your risk of death. In some very real ways, you really are ‘only as old as you feel.’”

The problem is, what if I feel different things different days? I’m in better shape than I have been in years, so most of the time I feel younger than 46.

Just last night, I was doing full frog jumps 40 minutes into my exercise class while everyone else was pretty firmly on the ground. (I love frog jumps, but hate burpees, which were also part of the class.)

That’s good, but what about that my back feels like I’m about 65 today? No, it wasn’t from my class; I think it’s because the supports have been blown out of my sneakers and I need new ones.

Also, if I can work the right wonders with my subjective age, would it be possible to live forever? Because I would like to do that.

The best player at one of the places I play pickleball on occasion — the type people warn you about the first time you’re going to take the court with him — is 75.

Or maybe 76, if he has had a birthday since I heard him correct a woman last fall who said they were the same age.

Before I forgot about it for more than 25 years, we learned to play pickleball in my high school gym class as part of the “lifetime sports” unit. And in fact, I’m almost always the youngest player wherever I go.

One of the people I play with regularly turned 65 a morning we were playing, but I wouldn’t have thought she was more than 55.

Pickleball is a game of small spaces, which is probably why it’s so popular among senior citizens, and while my being able to run faster is something of an advantage, it’s not really that much of one.

But the good news is that when my wife and I were watching the U.S. Open finals on TV last year, they said the oldest person in the tournament was 90, which caused me to say I have 45 more years to figure it out.

I’m pretty sure my wife groaned at that one, but who knows?

I might not even be in my prime yet.

One thought on “Is aging just what you make of it?”