Not long after we moved to our current house — three years ago next month — we were at a neighborhood block party.

When my wife mentioned that she walked to the train every morning, someone asked her if she knew about the path from our street down to the bottom of the hill by the train. Not only did we not know about it, we walked up and down the street and never found it.

All we saw was people’s yards.

It came up again a few weeks ago when we ran into someone from our neighborhood on one of our walks. She had pointed out the spot, so my wife suggested seeing what we could find when we went out for a walk today.

Even though parts of it did look like a path, it felt like we were walking through people’s yards, because we were, but there’s clearly an easement allowing people to go through or none of the homeowners cared.

At the bottom, my wife said she had heard one of the side streets took you to the new rail trail in town, which we had both seen previously.

Figuring we would have to get around the river, we assumed we’d have to go left and then turn down a side street.

Normally, we just drive by, so we had no idea there was an actual neighborhood back there, and sure enough, we were soon at the trail entrance. 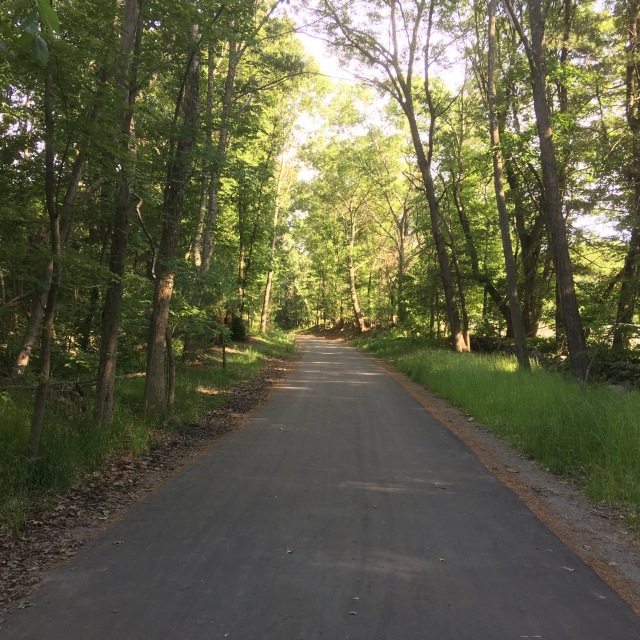 Once we reached the beginning of the trail by the train station, we started to turn for home, but we were curious about where the river was because a map on the trail said it ran under the road, but we have never seen it.

Then, by the agricultural supply store on the corner, another place we normally just walk or drive by, my wife heard the river flowing, and I saw what looked to be a path coming from the parking lot, including a fence.

The path really didn’t go anywhere, and the growth meant the water was hard to see, but it was definitely there. The store having “mill” in its name was a pretty clear sign why it was there and what it used to be.

It wound up as an interesting walk, and we got to learn a little more about near where we live.

3 thoughts on “Doing a little exploring”