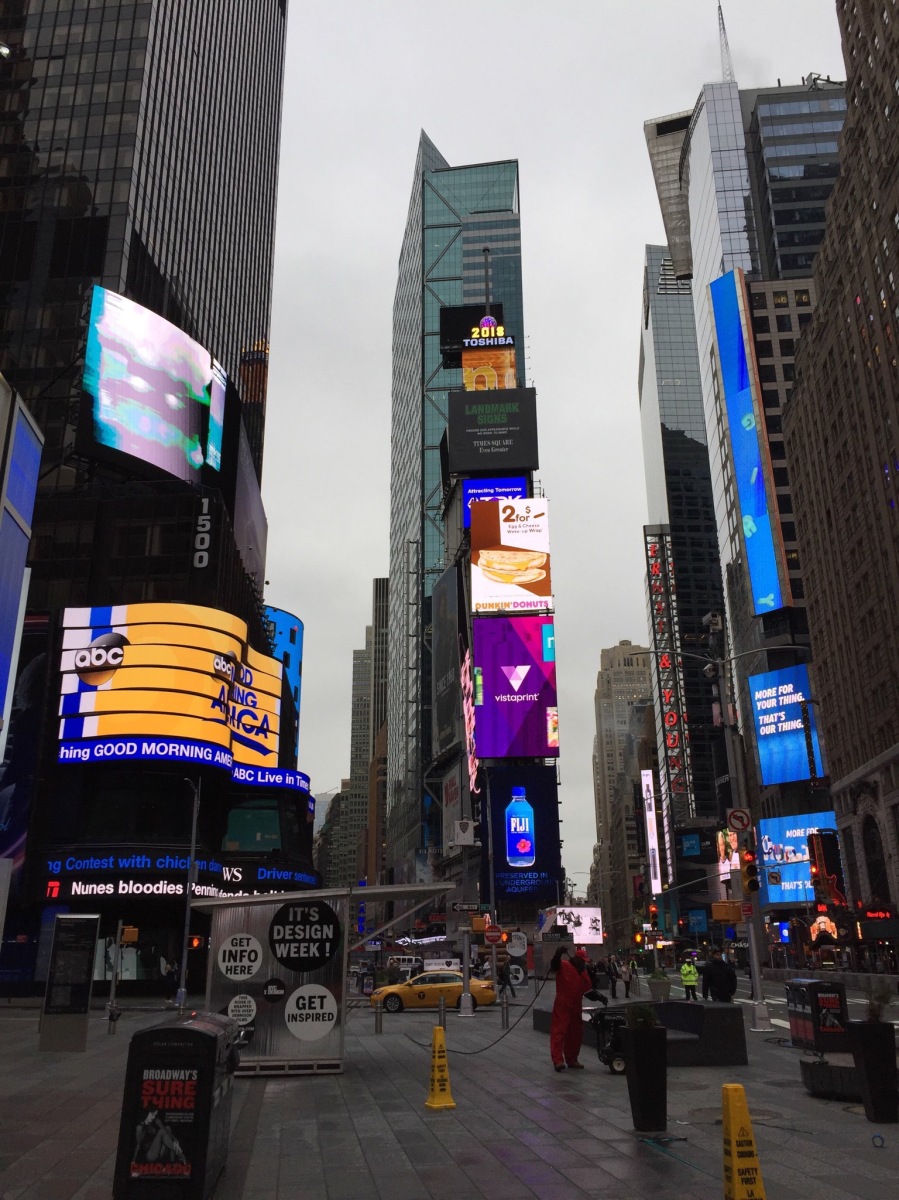 Walking through Times Square at 8 a.m. on a Sunday is to walk through a city waking up.

Or, since New York City famously never sleeps — nap-based business my wife and I saw notwithstanding — maybe it’s walking through a city drinking a large cup of coffee trying to sort out what happened the night before while it figures out what it’s doing today.

A fire truck speeds to an early call, while the sounds of horns greet anyone who, even at this hour, is violating the I’m-sure-unwritten but seemingly understood by everyone rules for getting around the city.

Captain America and Minnie Mouse, him holding her costume head, chat, the tourists they are to entertain having not arrived yet.

A tour bus picks up its first passengers.

A bus driver loads luggage onto a passenger bus. One of the riders is wearing a backpack decorated with pictures of doughnuts.

The garbage hasn’t been picked up yet. Maybe that comes after coffee. 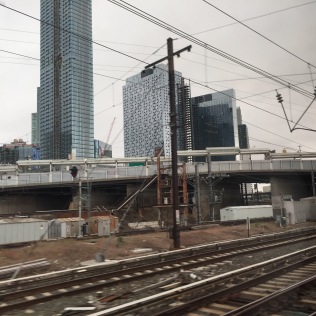 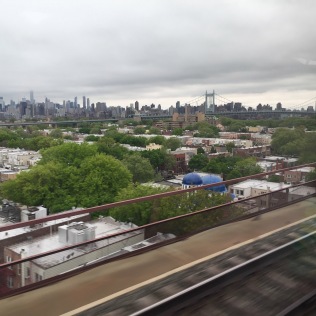 That means we’re at Penn Station, and it’s time to get on the train to go home to Massachusetts.

The train, of course, is late, and the couple behind us once we do get going is having an annoying conversation. 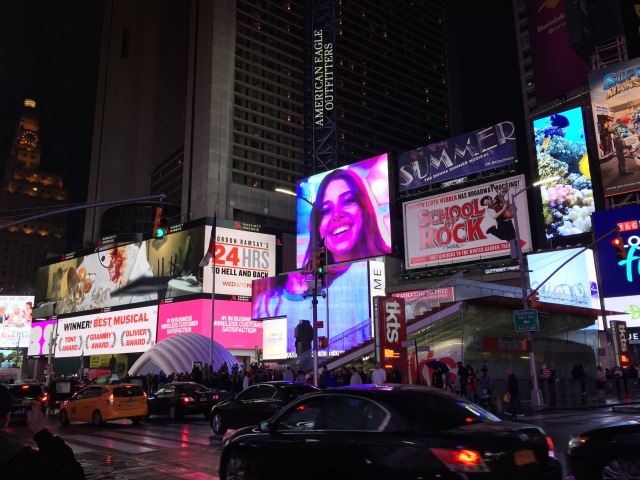 The easy thing to do would have been to just walk straight back to our hotel after dinner last night.

The chill that chased us from the Yankee game the inning before they won was still there, and the threat of rain was perhaps starting to be realized. (As we left the Yankee game, and again leaving our hotel for dinner, we encountered people who suddenly appeared selling umbrellas for $5. Between this and a business where people can come take naps, who says capitalism is dead?)

But we didn’t go straight back to our hotel.

I had to see Times Square lit up at night one more time. 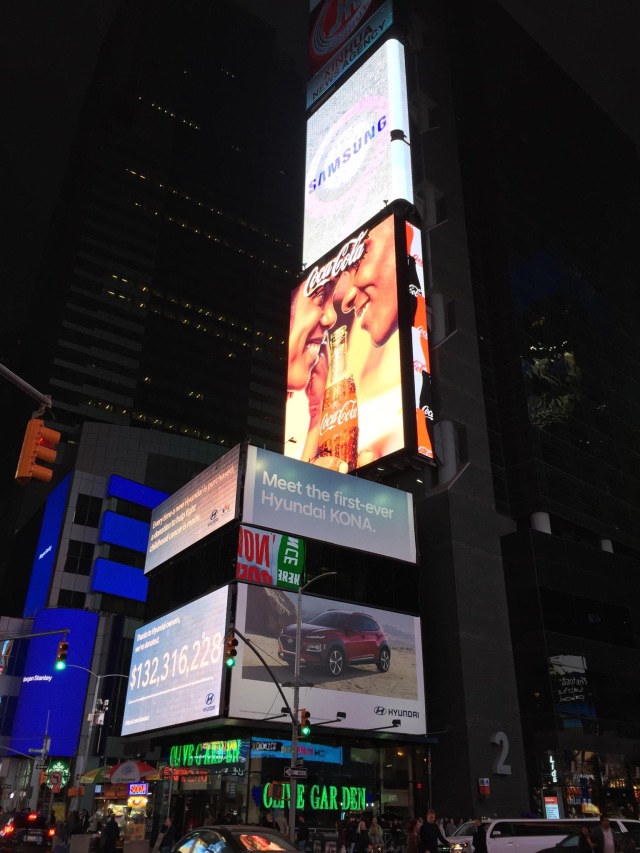 I am a tourist.

And while I like to think I’m not quite as bad as some tourists — for example, I understand the concept of  not stopping in front of everyone in the middle of the sidewalk — I do tourist things, including looking around, amazed at the scene, my mouth hanging open.

In other words, yes, I gawk.

No matter how many times I visit New York City, especially Manhattan, I can’t imagine ever getting bored by the place, by ever feeling anything other than amazed.

I can’t ever imagine not gawking at the flashing lights, moving pictures and general sensory load of Times Square, although I do draw the line at ever spending New Year’s Eve there. I have no desire to spend hours in the cold with a couple million of my closest, drunkest friends.

There’s just … so much in New York. “Broadway” is the universal American expression for a play or musical being a big deal … and in New York, Broadway is right there. “Hamilton” and “Chicago” and “Kinky Boots” and all the rest are right there.

Madison Square Garden is right there. Stephen Colbert does his show at the Ed Sullivan Theater, and it’s right there.

Lincoln Center is right there.

Central Park is right there.

The Met, the Whitney, all kinds of museums … right there.

Any kind of food you might want, and multiple places offering it, from street vendors to fine dining, are right there.

Yankee Stadium is a fairly short train ride away.

And the people! The people are a show of their own. They’re young and old, short and tall, men and women, glamorous and ordinary-looking (like me!), of every race, nationality and religion. You could make a day out of just watching them, trying to figure out what they do and what they’re up to … and perhaps making a joke or two.

I understand that New York City isn’t Utopia, that it’s a place where people live, and the living there isn’t always fun and great. For instance, although our train ride to Yankee Stadium yesterday wasn’t awful, I’ve heard they’re having a problem or two or all of them with the subway system lately.

But for me, the tourist, New York will always be a place of wonder.

I’ll always be a small-town boy in the big city.

P.S. I wrote a couple other things about my trip to New York this weekend.

Friday was about as perfect a day as you could imagine.

Yesterday was a Yankees game, which is always awesome, but if we hadn’t left, they would have lost in 16 innings and my hands might still be frozen.