A few years ago, I went to Utica College for Reunion Weekend.

I go every so often, and when I do, I go Friday morning, before any of the official events start. I enjoy walking around the campus, going to the bookstore, being in the city. It’s invigorating.

I sat in on Carol Downing’s communication class. She invited any alums coming up early to join in. So there I was, in the classroom where I had so many times before, which I had once dubbed the “Downing Dome” because it was basically her room, even if other professors had classes there.

Tables had replaced the chairs that had been along the outside walls, but the discussion was fun, the students enjoyable to be around. After it was over, I thanked them for letting me play in their sandbox for a while.

The other night, I watched her final lecture, which one her students had streamed on Facebook Live.

I once sent an email to my friend Dave.

As I remember it, I had just finished reading my “Pioneer” alumni magazine from Utica College, and once again, I couldn’t believe everything that was going on.

New buildings were going up. New programs were starting. Theodore Orlin — one of our criminal justice professors who, even if you didn’t have him, you knew to always pay atention if you were in his classroom — was championing human rights all over the world.

So when I wrote to Dave, it was to lament that it seemed like we had been born 10 years too soon.

His reply? Basically that we “turned out all right.”

I’ve thought about that response over the years, and always came to the same conclusion — that we turned out all right because even if the “things” at UC weren’t the same as other colleges, the people were special.

People like Carol, or my favorite English professor John Cormican, or my journalism professors Cecilia Friend and Kim Landon — who, if she sends you a message asking why you haven’t signed up for the alumni event in Boston, you drop everything and sign up for the alumni event in Boston — or the Mary Ann(e)s, Hutchinson and Janda, and Patty Dunn, my main Writing Center bosses.

But it wasn’t just the professors. It was office staff, security guards, custodians and a whole bunch of people I’m probably insulting them by not mentioning them by name or role (my apologies) — it felt like we were all in it together. People cared, about the college, about each other.

It was a great place to learn … and a better place to go from being a high school kid to a young adult. 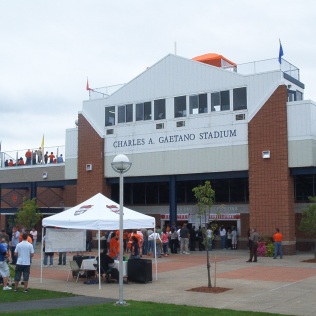 The changes haven’t stopped. I don’t get to Utica all that often anymore, but when I do, there’s always more and newer of something. I once got lost trying to find one of my old professor’s offices because it was in a building I didn’t recognize and couldn’t find.

They’ve even changed the rules for the dorms. I didn’t just live in South Hall four years; I lived on the same floor for four years — second floor, women’s side. (The floor had gone co-ed, but they never changed the name.)

In Carol’s final lecture, she frequently brought up the expression that you never stand in the same stream twice … things are always changing.

Most of the kids in Carol’s class, by this point even the seniors, weren’t even born yet when I graduated, but I’m willing to bet a lot of them wound up in her class the same way — when they were freshmen or sophomores, an upperclassman told them they had to get in her class, that she was a great professor, and a lot of fun.

I’m pretty sure it was a student named Jean — one of Carol’s fabled “Magnificent 7” who graduated two years before me — who tipped me off, I think as a leader of something I was involved in as part of freshman orientation. Probably someone told her, and I’m certain I told more than a few freshmen myself.

The stream changes, but it always keeps flowing, and the bonds remain the same.

It’s because of those bonds, that when you hear about a student being bullied on social media, you find her the next day at the football game, and even though you only met her the day before, and you remind her that she gets to wake up every morning and be who she is, while the people bullying her have to wake up in the morning and be a—holes.

(Yes, I actually said that. It’s one of my favorite expressions.)

So the stream keeps going, and the stream changes. Most of the people I associated with college have retired or are retiring. I think Cormican may be one of the few left.

Ray Simon, an absolute legend, the “father of public relations education,” died last November at 102. I only met him a couple times, but fairly early in my career, I took part in a job fair his institute was holding on campus. We got umbrellas as thank-you gifts. I still use mine; I call it my “RSI umbrella.”

The Utica College of 2018 is vastly different than that of 1994 when I graduated, and when this year’s seniors see it in 2042, they’ll ask, “What is going on here?” I’m sure that when the college bought the hotel across the street to turn it into the Burrstone House dorm, students dating back to the earliest days of the college in the 1940s and 1950s wondered what that was all about.

Although the changes are jarring, I don’t want to be the old man yelling at the cloud. Times changes. Students change. Expectations change. Life changes.

I have no reason to believe that the next generation of professors and staff are anything but fine people. I just hope that as the things get newer, bigger, better, they remember it’s people who make the difference between a university with great things and a great place to learn and go from being a high school kid to a young adult.