People cheered when the lights went down.

Lots of things in life come with hype — the release of a new iPhone, a certain American football game this Sunday — but how many of them come with the expectation that it be brilliant at worst, life-altering at best?

How many of them come after you’ve had to (forgive me for this one) “wait for it,” either the years it took to come to your city or an entire year since you bought the tickets and planned the travel to see it?

And how many of them bring an audience that is likely knowledgeable enough about it so as to compare everything they see to who and what came before?

All of that causes the kind of energy at the Victoria Palace Theatre in London last night for “Hamilton” that would manifest itself in cheering for the lights dimming. Then everyone laughed when King George (played with brilliant buffoonery by Michael Jibson all night) came over the PA system to welcome people to “his” show.

We built our London vacation around seeing “Hamilton.” My wife had seen an opportunity to possibly purchase tickets when the show came to the West End, and it came through.

Even better, the seats were in the third row, for a tiny fraction of what they would have cost on Broadway, if you could get them at all.

What we saw for the next 2 hours and 45 minutes was an amazing spectacle of music and dance. Jamael Westman — 25 and not long out of drama school (he had the shortest resume of the entire cast) — commanded the stage as Alexander Hamilton, helped in no small way by his 6-foot- 4-inch frame.

As Aaron Burr, Giles Terera delivered a blistering “The Room Where it Happens” that ended with him holding the spotlight no more than 15 feet away. If there was a time I wanted to take my chances on getting thrown out for taking a picture, it would have been then.

Rachelle Ann Go was heartbreaking as Eliza Schuyler in the face of her son’s death and husband’s infidelity, and Jason Pennycooke played the Marquis de Lafayette and especially Thomas Jefferson as if James Brown was in the role.

My favorite song in “Hamilton” is “One Last Time,” and Westman and Obioma Ugoala as George Washington gave me goosebumps.

So was it worth the hype, worth the wait? And then some. It was spectacular.

In the program for “Hamilton,” Cameron Mackintosh writes about rebuilding the inside of Victoria Palace Theatre, one of eight his company owns in London.

It is a beautiful building, something which really can’t be said of the National Theatre near the banks of the Thames.

Prince Charles once called it “a clever way of building a nuclear power station in the middle of London without anyone objecting,” which was both mentioned by our tour tour guide yesterday morning and is written on a wall display, so they’re clearly not ashamed of what the future king had to say. 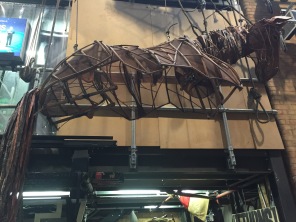 For the National Theatre is all about function, not form. It took a great deal of work to renovate Victoria Palace Theatre and prepare the “Hamilton” stage — so much so the opening was delayed — but it’s one stage and one show that won’t be leaving anytime soon. (Bookings are available through Dec. 15, and it will probably be there a lot longer than that.)

Meanwhile, at the National Theatre, there are three stages, often sharing two shows that alternate every several days, and sets are built and stored right on-site.

It requires a veritable factory behind the scenes and systems that include a rotating drum with elevators, retractable seats, giant storage bays just offstage and crews that pride themselves on building lifelike sets and turning over an entire stage in just a matter of hours.

Our tour — which wound up being a private one, since my wife and I were the only ones who signed up — was a fascinating glimpse into what it really takes to put forth what we see on stage.

16 thoughts on “London Travels: Waiting for “Hamilton” no more”